NEW JERSEY – With just a few days to go before the November 3 general election, supporters of President Donald J. Trump were out in full force all around the Jersey Shore Sunday, rallying their base with events including a convoy that ended up blocking traffic on the Garden State Parkway.

State Police reported that a convoy of vehicles with Trump flags and banners made their way around the Garden State Parkway and according to social media posts and videos, parked in the express lanes and on the shoulders of the road.

Supporters waved their Trump flags and even noted “we shut it down, baby. We shut it down” in one video. Many horns were heard by the supporters’ vehicles. The incident occurred in Holmdel.

Some took to social media to say that the traffic was caused by the New Jersey State Police when they closed some of the exit ramps. Jersey Shore Online is waiting for the police to respond to inquiries on that fact. So far, no word on whether that is true or not.

Hundreds of Trump supporters also took to the road to show their support at FirstEnergy Park in Lakewood with a passionate caravan. Thousands of supporters for the president’s reelection bid also made it to Veteran Park in Berkeley Township for the statewide “MAGA (Make America Great Again) Drags event.

While many took to social media to celebrate, not everyone was pleased. “Emergency vehicles had to take alternate routes to get to the hospital because of this shut down. People were late to work. I have no idea what they think they accomplished by shutting down the parkway and how on earth that act supports a presidential candidate,” JC Johansson told Jersey Shore Online.com.

“They accomplished the same thing one deer can, caused a traffic jam that someone else has to clean up and is disgusting to look at,” Nikita Rae posted to a social media page thread discussing the situation.

Others had no issue with the November 1 rallies.  “God bless America. Thank you to all who are coming out to protect our freedoms,” Janine Chiappetta said on another social media page.

According to the supporters, Veterans Park was the destination point for caravans which shut down the GSP and caused backups along Route 9 as vehicles waited to enter the park.

Andrew Gibson, 32, of Barnegat is a conservative blogger who said the varied vehicles “just kept coming” and were lined up all the way from the entrance of Veterans Park to Double Trouble Road. He helped direct traffic in the park.

Thousands of vehicles came into Veterans Park decorated in flags and banners. The event, like several road parades that occurred in October, were heavily organized through social media use.

Trump is trailing in most national polls and while Ocean County is a strongly Republican county as well as some other parts of the state, it is not expected that the president will carry the Garden State in this election. However, as 2016 showed, you never know – polls were wrong before.

The rally in Lakewood was reported as having been organized by a group of young men who wanted to show their own support for Trump. Their hope was to see New Jersey turn red. Along with various, red, white, and blue flags was also a flag of Israel. The president is popular among the Orthodox Jewish community who are the majority voters in Lakewood. 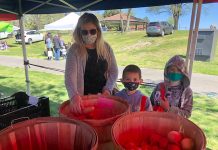