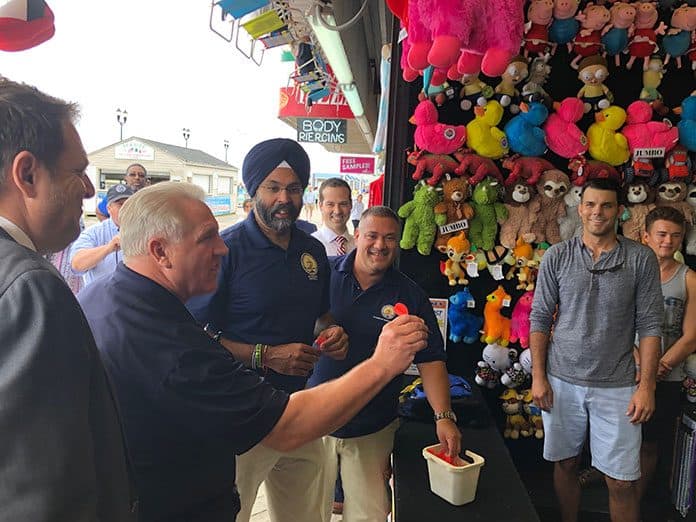 SEASIDE HEIGHTS – How can you be sure that the odds aren’t stacked against you when you play boardwalk games, or that you are getting the full pound of salt water taffy that you paid for?

State Attorney General Gurbir S. Grewal came to the Seaside Heights boardwalk to kick off an initiative to inspire consumer confidence that they won’t be scammed while playing games of chance, or cheated while buying goods on the boardwalk this summer.

Other officials present on the boardwalk included Seaside Heights Police Chief Thomas Boyd and Ocean County Prosecutor Bradley Billhimer, who joined the attorney general in several boardwalk games to demonstrate how officers from the DCA’s Legalized Games of Chance Control Commission (LGCCC) do their inspections.

“The goal of this event is really just to have consumers have confidence that when they come to the boardwalk to spend their hard-earned money and start their summer celebrations, that they can know they’re gonna get a fair deal when they play these games, or that when they go to buy something at one of these stores the signage is accurate, the prices are clearly displayed,” Grewal said.

Heading over to a dart game, Grewal said DCA inspectors first make sure that the entity is licensed with the DCA, which must be renewed every year. Then the inspector checks to see if the gaming booth has their prices and rules posted.

The officials checked the distance between the player and a basketball hoop, measured the throwing distance at Bottle Bust, and made sure a claw could pick up everything in the play field and that items displayed were in the case.

Afterward, inspectors checked the calibration of scales used to weigh candy and fudge in one of the sweet shops on the boardwalk. Each scale must have a state seal.

Under the Amusement Games Licensing Law, enacted in 1959, the state began licensing and inspecting amusement games under the auspices of the NJ Division of Alcoholic Beverage Control (ABC), which was transferred to the DCA in 1993.

Asked if inspectors frequently found violations, Rodriguez said that when the games were regulated by the ABC there were many.

“It’s rare to catch violators now, because the first violation – and each vendor could have multiple games and multiple violations – is $250,” he said. “We are very clear about what we are looking for, so now they are mostly compliant.”

According to Karl Reidel, executive officer at LGCCC, the shore is comprised of 16

municipalities where licenses have been issued at 266 locations.

Police Chief Boyd welcomed the attorney general, and thanked him for coming to Seaside Heights.

“You can never have enough oversight. We work hand-in-hand with the attorney general to make sure the public gets a fair shake,” he said. “We could use all the help we can get.”