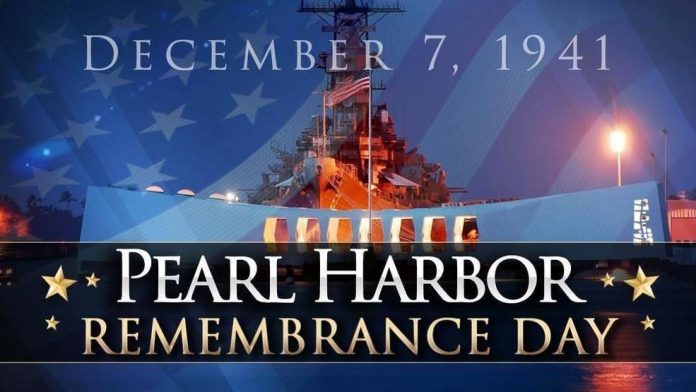 TOMS RIVER – President Franklin Delano Roosevelt described it as day of “infamy” and while survivors of the fateful attack on Pearl Harbor are nearly all gone, those who endured the sneak attack by the Japanese government will never be forgotten.

Freeholders Joseph H. Vicari and Gerry P. Little, whose fathers both served in World War II, requested that all Ocean County residents remember the 79th anniversary of the Japanese attack on Pearl Harbor.

Vicari said, “it’s important that the younger generations especially remember the importance of December 7, 1941. Pearl Harbor was our fathers’ and our grandfathers’ 9-11.”

The attack took place around 8 in the morning, Hawaiian time, when warplanes from six Japanese aircraft carriers swept above the harbor on a beautiful Sunday morning, dropping torpedoes against America’s Pacific Fleet.

The victory was complete, but short-lived and over 2,400 Americans were dead as the fleet burned on the shallow harbor bottom.

Pearl Harbor united the nation and within days volunteers lined up in long lines at recruiting offices around the country.

Little said, “the nation had been strongly divided before the attack. Many people wanted the country to stay out of the war. Pearl Harbor changed all that and filled the nation with resolve.”

The fleet was quickly rebuilt and of the 23 ships sunk or damaged, all but three returned to service. The most famous casualty of the attack, the USS Arizona, remains on the harbor bottom, a memorial to the 1,177 sailors and marines killed when a bomb touched off her forward magazine.

The war ended with when the Japanese surrendered unconditionally nearly four years later on September 2, 1945.

“They truly are the Greatest Generation. Let us remember all of the brave men and women who fought against tyranny around the globe,” Little said.

The Freeholders noted that a member of the Greatest Generation and a victim of the Pearl Harbor attack returned home only three years ago. The remains of Machinist’s Mate 1st Class Earl R. Melton of Lakewood were identified in 2017 and were buried with full honors at Arlington National Cemetery.

Melton had been trapped on the battleship USS Oklahoma when the ship was hit by multiple torpedoes and capsized, killing 429 men according to the Defense POW/MIA Accounting Agency. This is a federal agency charged with identifying missing and deceased American servicemen and servicewomen from all wars.

Man Wanted For Ripping Off Senior