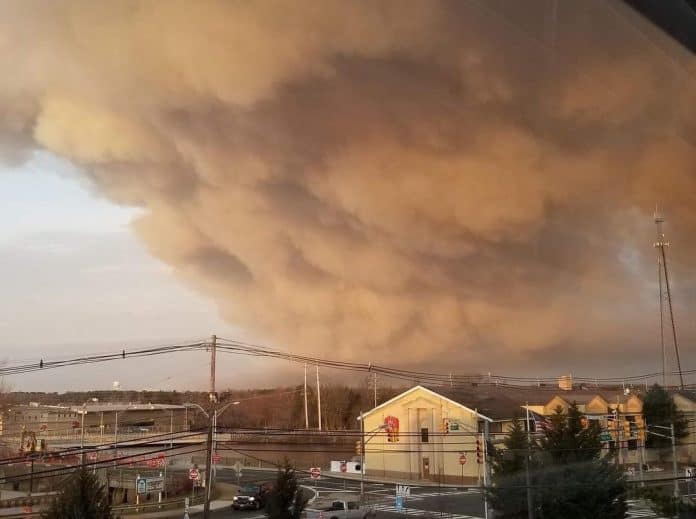 BURLINGTON COUNTY – The aroma of thick black smoke continues to permeate throughout the Garden State as a massive inferno destroys thousands of acres of forest.

The fire broke out Saturday afternoon and according to Department of Environmental Protection spokesman Larry Hajna, has charred 10,000 acres so far, as of a 1:50 p.m. update.

Hajna told Jersey Shore Online that as of Sunday morning, the blaze is 75 percent contained, no evacuations have been needed and no one has been injured.

Fire crews from all over the state have been helping to squelch the flames.

A Nixle alert sent by the Ocean County Sheriff’s Department stated that residual smoke could be seen as far south to Atlantic City and as far north as Sandy Hook. Social media chatter also indicated that the smell of the smoke was reaching as far north as South Plainfield.

Route 72 in Ocean County near Route 539 was opened back up at around 4 p.m. Sunday according to Barnegat Police.

There are no threats to structures or property damage at this point.

Governor Phil Murphy releases a statement on the fire:

“The forest fire in Ocean and Burlington Counties covers 10,000 acres and is currently 75 percent contained. First responders are working quickly to limit further expansion. The cause is under investigation and we remind all of those in and around the affected area to remain vigilant, and heed the instructions of safety officials. The Department of Environmental Protection and State Police remain on alert, and we are grateful for the swift response of the brave men and women who have been working tirelessly overnight to contain the fire to prevent injury and loss of life for our residents.”

This is a developing story. Please check back for updates.