George: The sea was angry that day, my friends, like an old man trying to send back soup in a deli. I got about fifty feet out and suddenly, the great beast appeared before me. I tell you he was ten stories high if he was a foot. As if sensing my presence, he let out a great bellow. I said, “Easy, big fella!” And then, as I watched him struggling, I realized that something was obstructing its breathing. From where I was standing, I could see directly into the eye of the great fish.

State Police didn’t say what kind of whale—although it likely wasn’t a sperm whale—capsized a 20-foot fishing boat one mile off the coast of Deal Thursday. State Police said the whale emerged from under the boat, causing it to capsize and throwing its two-member crew into the Atlantic. The men clung to the capsized boat, though they managed to call over the radio for help.

The men, not named in reports, were uninjured.

“Charges against the whale are pending its apprehension,” NJ State Police said.

Humpback whales are a common sight along the coast, especially in spring, summer and autumn months. Many, but not all, migrate to the West Indies in the winter months, often to calve. They feed on krill and small fish.

“The NJS Police has reported that a humpback whale capsized a small fishing boat off Deal NJ. They are making a joke out of it (it is somewhat funny) but if you’re in a private boat, please be safe and smart when you are around whales,” Gotham Whale, a citizen science group based in New York City, posted on social media Friday. 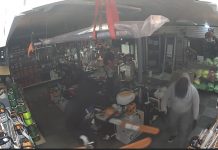 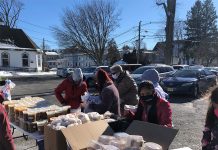