MONMOUTH COUNTY – The leader of a drug trafficking organization was sentenced to 200 months (more than 16 years) in prison for supplying Monmouth and Middlesex counties with cocaine.

Guy Jackson, 49, of Effort, Pennsylvania, had previously pleaded guilty to drug dealing charges. He will also have five years of supervised release.

Police said that Jackson and his accomplices operated in the Raritan Bayshore region of Middlesex and northern Monmouth counties. They distributed large amounts of cocaine and heroin, and some of the heroin contained fentanyl. Police investigation included interception of phone calls, wiretapping, and other confidential sources.

He was at the top of a takedown of 15 defendants in 2018, according to police. Of these, 13 have pleaded guilty. 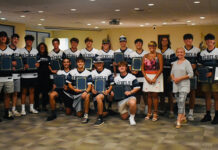