MANCHESTER – Township Officials approved an ordinance that is aimed at curtailing the growth of invasive plants. In this case, bamboo.

“Some people like bamboo but it always finds its way to grow onto the property of other neighbors. It is hard to get rid of it,” Council President Craig Wallis said.

“This is just clarifying that the homeowner or landowner will be responsible for clearing off these plants off their property,” Wallis said prior to the vote. The Council unanimously approved the measure.

In a move similar to communities like Howell Township in Monmouth County and some Ocean County municipalities, the township is aiming to stop the uncontrolled growth of bamboo plants which can cause damage to the property of neighbors.

“The point of doing this type of ordinance isn’t to say, ‘Oh you are feeding one squirrel over there, that’s a no no.’ Or some deer that are eating your flowers. That’s not the purpose of this. We are going after building colonies of these animals. We’re not going to stop you from feeding your birds and we know squirrels are going to eat your bird seed,” Wallis explained.

The council president added, “we know there are people out there that are feeding colonies of these animals. I don’t want it written so tight that we are saying that you are feeding hummingbirds and bluejays but can’t feed squirrels. There is some common sense here. We don’t have the resources to go out and go after everyone who is feeding the colonies. We don’t want (the ordinance) narrowed to nothing – nor do we want it including too much.

“We are trying not to be so restrictive that we are micromanaging common sense. That is what we are trying to stay away from. If we need to revise this, we can always revise it. We are trying to keep it as simple as we can. We just need to have the power to fix the real problems,” he added.

Wallis noted that the governing body had received some e-mails asking for clarification on the ordinance.

In other news, the Council approved an ordinance authorizing the sale of four properties in the township which include 202 Pine Street as well as 302, 304 and 316 Central Avenue in the Whiting section of Manchester.

In his report, Councilman James Vaccaro noted his attendance at the sixth annual Luau at Harry Wright Lake which is part of the recreation department’s summer concert series. “It included an amazing fire dance performance.” He complimented the director of the Recreation Department and her staff “for the outstanding work on the summer concerts and the summer camp program.

Council Vice President Joan Brush said she also attended the luau and that it was “a very well attended event. It was nice that we didn’t have to sit in little (marked off) circles as we did last year (due to social distancing requirements).

Vaccaro was also happy to report “that we are making progress on our 10-year renewable energy program. However, as an aside, this week, three major automakers have planned to have 40 to 50% of new vehicle sales by 2030 be electric models.”

The councilman said these would be full battery electric and plug in hybrid and that means “time is of the essence and we must now consider high speed vehicle charging stations in Manchester. Applicants before the Planning Board have already started to incorporate supply of these new charging stations for our vehicles.”

Wallis said he recently did a test drive of a Tesla electric vehicle. “If you get a chance, try one. They are the wave of the future and they are impressive. They really have come far from what they were just a few years ago. Most of the car manufacturers are moving that way (toward electric powered vehicles).” 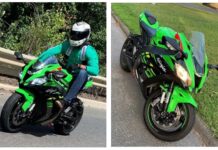