MANCHESTER – A Leisure Village West resident who had difficulty pulling into her own garage caused massive damage to neighboring vehicles and property on Yorkshire Court.

Manchester Township Police reported that 71-year-old Jacquelin Earls struck a refrigerator in her own garage while attempting to pull in. She then put her vehicle, a 1986 blue Toyota Camry, into reverse and accelerated out of her garage, crashing into a parked 2015 white Honda Accord. The force of impact caused the Accord to strike a 2013 black Volkswagen. The Honda then struck the electrical service in front of 1B Yorkshire.

Earls then reportedly put her car into drive and accelerated forward, hitting a 1957 black Morris Minor, parked in the driveway at 2B Yorkshire Court. That car was forced forward and crashed into the garage, hitting the Kia Forte in the garage.

Earls put her car in reverse again, this time striking the curb and residence of 2B, causing damage, police said.

She then accelerated forward into a JCP&L electrical transformer box in front of 2A Yorkshire Court. She struck the community mailbox before finally deciding that maybe she should just stop.

Police determined she was not wearing a seatbelt.

She was taken to Community Medical Center in Toms River with pain complaints. She’s listed in stable condition. 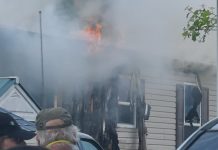