One of the ordinances passed involved the salary ranges and positions of bargaining unit employees which includes three positions, badge checkers, beach attendants and camp counselors which is up to the minimum wage level at $15 per hour.

“It will bring it in line with the contracts,” Council President Craig Wallis said. The ordinance was adopted unanimously.

An ordinance concerning uniform construction codes and fire prevention was also unanimously approved. “This is just correcting three inconsistencies from the February ordinance that we did so we found where it actually referred to these areas and we needed to make that correction,” Township Clerk Sabina Martin said.

Other ordinances included one that involved administration and enforcement and the sale of township property at 1325 Monmouth Avenue. “This is a 50 by 100-foot property in Pine Lake Park and the minimum bid that is going to be set on this is $40,000,” Martin said.

“It will be sold to an adjacent property owner when the bidding is opened and it can only be used to make a conforming lot. There will be no variances granted on it,” Wallis added.

A variance is when a town allows something to be built where it normally wouldn’t be allowed.

An audio and lighting contract was approved for authorization for the township’s concert fest event as well as a revision of D&M fireworks contract for an event on August 25. Two public works trucks were also approved for purchase and a yearly maintenance contract with Motorola Solutions for services to the police department was also approved.

An application for an agreement, at no cost to the township, was also approved with the Environmental Defense Fund which assists with energy audits, utility incentives and other energy saving services, according to Martin.

Wallis added, “the fireworks were moved to later in the concert year in hopes that the restrictions would ease up more so that we don’t get the 500 people and we have to say ‘Okay, everybody else go away.’ Hopefully, by the end of August we have a full-blown fireworks celebration and maybe the start of the new normal as we like to say.”

Early in the month, the governing body recognized Police Appreciation Week with a proclamation during the month noting that Manchester’s Police Department was one of the best police organizations in the state “and the Manchester Police Department goes beyond the call of duty in serving the residents of our township.

“The good deeds performed by police officers every single day are deserving of our support and appreciation and encouragement for the challenges they face daily,” the proclamation stated. Police Appreciation Week was observed on May 9 through May 15 in the township “in recognition of those peace officers who protect us through enforcement of laws.” 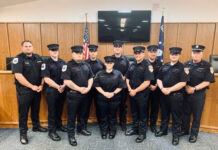