At 7:57 a.m. Oct. 19, officers responded to the scene of Route 571—Ridgeway Road—an Beacon Street where a two-car collision resulted in one vehicle being overturned.

Alex Luft, 19, of Manchester, was driving his 2003 Jeef Grand Cherokee on Beacon Street when he stopped at a stop sign, and turned left onto Route 571.

He was struck by 32-year-old Danielle Rosiejka of Jackson, who was traveling south on Route 571 in her 2004 Nissan Rogue.

The impact caused the Jeep to roll onto its passenger, then driver’s, side.

Manchester Township Police determined that Luft was not wearing his seatbelt at the time of the crash. His driver’s side airbag did deploy. He reportedly sustained neck and head injuries, and was taken to Community Medical Center in Toms River for treatment.

Rosiejka was wearing a seatbelt at the time of impact. Multiple airbags deployed in her vehicle, which sustained heavy front-end damage. She complained of head and chest pain, and was also transported to Community Medical Center for treatment. 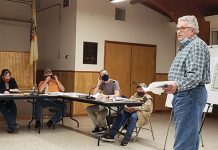