MANCHESTER – The Manchester Police Department just released a powerful and emotional video as part of its #NotEvenOnce high school opiate awareness program, aimed at teaching students the dangers of trying opiates before they leave for college or enter the workforce.

The video, titled “Through the Eyes of a Mother,” features Shelly Lowe, a Manchester resident who suffered the heartbreaking loss of her son Adam Lowe, Jr. in November 2016 following his struggle with heroin addiction.

“Mrs. Lowe agreed to assist our #NotEvenOnce program because she wants to prevent this type of tragedy from happening to other families. Because of how moving this video is, I wanted to share it beyond the classroom and with our entire community with hopes that her message of prevention will be heard loud and clear,” said Police Chief Lisa Parker.

The video opens with Chief Parker sharing some alarming statistics about the opioid epidemic, and that Manchester saw its fatal overdose rate increase 300 percent from 2015 to 2016. Adam’s mother then talks about her son growing up, and how she feels the friends he surrounded himself with later in his life played a role in his path toward addiction.

Although the video is difficult to watch, Mrs. Lowe hopes that it won’t be just another sad story, but instead a call to action, saying, “This isn’t just a disease, this is a plague of volume.”

Manchester Police officers have trained nearly 400 law enforcement officers from across the state to teach the #NotEvenOnce program in their local school districts. The most recent training took place on October 16, where over 30 people were trained on the program.

Students will view “Through the Eyes of a Mother” as part of the #NotEvenOnce opiate awareness program so they can gain a better understanding of how drug abuse impacts families. Manchester Police also urge all residents to view and share the video, which can be found at manchesterpolicenj.com/not-even-once.

Chief Parker and the Manchester Police Department thank Shelly Lowe for her courage and strength in sharing her story, and Ralph Bertini from Ocean County College for his help in producing the video. 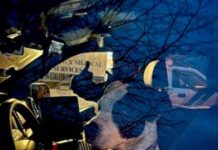