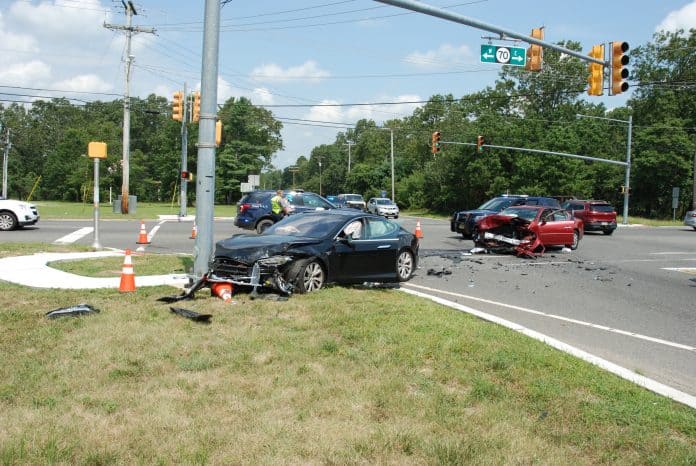 MANCHESTER – It’s been called one of the most dangerous intersections at the Jersey Shore. There was yet another accident on Wednesday morning at the intersection of Route 70 and 539 that tied up traffic for several miles and sent two people to the hospital with injuries.

Lieutenant Vincent Manco confirmed officers arrived at the scene of the head-on collision just before noon.

The investigation revealed 78-year-old Kathleen Falcon of Whiting was at the wheel of her Buick Lucerne heading north on 539 when she turned left onto Route 70 and failed to yield the right of way to a Tesla Model S heading south on 539.

Falcon’s Buick struck the Tesla, driven by 34-year-old Carl Pachmayer of Phoenixville, PA. The impact of the crash caused the airbags in both cars to deploy and there was heavy frontal damage.

Police said after the collision, the Tesla hit a curb and struck the traffic signal support.

Police confirmed the Tesla had the right of way thanks to the green arrow. The Buick turned in front of it causing the crash.

Falcon and her passenger, 96-year-old Candido Falcon were both wearing their seatbelts and were transported to Community Medical Center in Toms River for treatment of minor injuries.

Pachmayer was also wearing his seatbelt and sustained minor injuries but refused any further medical treatment.

Traffic in the area had to be diverted for several hours as emergency crews were rendering aid to the victims and for the probe.