TOMS RIVER – An appellate division of the New Jersey Superior Court agreed with a judge that a murder suspect is not a threat to others and should be monitored at home instead of in jail.

Thomas Foster, 63, is accused in the murder of his mother, Carolyn Foster, 85. They lived together in a Cedar Glen West home.

Previously, a judge had determined that due to the suspect’s child-like nature, it would be sensible for him to be monitored at home rather than wait in jail for his trial.

According to the appellate court’s motion, he has no red flags indicating a risk of violence and that the judge’s decision was “a reasonable exercise of discretion.” It also indicated that he was not a risk of fleeing and not appearing in court.

Carolyn Foster died in January, and due to her age and medical history, officials determined the manner of death unsuspicious.

However, a family member later came forward claiming Thomas Foster had killed his mother. A post-mortem investigation concluded that “other contributing factors may have been involved in Carolyn Foster’s death,” according to a press release from the Ocean County Prosecutor’s Office.

In a detention hearing, Superior Court Judge Wendell Daniels read letters from people who knew the defendant, and vouched for his gentle demeanor and child-like ways. The judge also described testimony that Thomas Foster found his mother slumped over and that he attempted to revive his mother, at one point punching her in the throat because he read in a book that an action like that could provoke a miracle from God. He waited all night for the miracle to happen, checking in with her throughout the night. 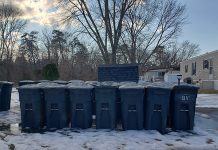