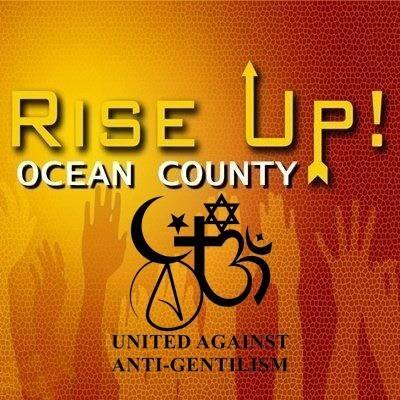 JACKSON – A social media group responded to accusations by a Jewish human rights organization, several local officials and multi-faith leaders to being anti-Semitic through its text and images on a Facebook page and its documentary project.

The group called Rise Up Ocean County became active around a year ago and has focused on development and growth issues associated with the increase of the Orthodox Jewish population in Ocean County, primarily centering on the townships of Toms River, Lakewood and Jackson.

A Feb. 13 press conference held in Jackson showcased emotions and concerns regarding the content of the Facebook page and four trailers for the documentary Ocean County 2030 which was originally scheduled to be released on Feb. 18.

While critics of the group acknowledge that issues of concern do exist regarding development, parking and overall growth they expressed that Rise Up Ocean County has slanted its presentation of those issues and also used inappropriate images to convey its message. They also criticized its non-disclosure of who is operating the social media group and website.

The press conference in Jackson was coordinated by Simon Wiesenthal Center East Coast Director Michael Cohen. His organization drafted a resolution that was presented to Lakewood, Toms River and Jackson townships along with the Board of Ocean County Freeholders. Lakewood approved the resolution earlier this month which condemned the group’s approach as hate speech and anti-Semitic.

In response, Rise Up Ocean County condemned Lakewood’s approval of the resolution. In a press release, the group stated that “the administrative team and nearly 6,000 Facebook page followers of Rise Up Ocean County condemn the tactics being deployed by a small minority in the Orthodox Jewish community that oppose our efforts to reduce development, protect our environment and natural resources, limit the strains on our infrastructure, protect the resources available to our public school systems and to root out the corrupting influences that have dominated Ocean County for two decades.

“We further condemn the governing bodies that would so willingly forgo our first amendment right to free speech to curry favor with a small but very powerful group in the Lakewood community. Doing so using ‘anti-Semitism’ as the rallying cry is not only disingenuous but reeks of the corruption that we are so aggressively fighting,” the release stated.

“To those governing bodies unwilling to bow to the extraordinary pressure being applied today, we salute you and support your fortitude,” the release states adding that the resolution originated with a councilman from Bergen County. “A man who knows nothing about the struggles that Ocean County faces has no business spreading his venomous and unfounded attacks here.”

The release also stated that “we do not intend on bowing to the will of a small group of individuals that are wanting to maintain the fiefdom that they have created for themselves, our efforts will continue unabated.”

The Jackson Times reached out to Rise Up Ocean County through its website to elaborate on the growing issues surrounding it and was requested to provide questions.

The group responded to various questions posed concerning its anonymity, purpose and the allegations of it having an anti-Semitic foundation.

The unnamed respondent said that “a group of 20 or so residents of Toms River and Jackson were engaged in a private message discussion for approximately four months. In October the decision was made to take the discussion public in the form of a website and social media presence.”

When asked for the identity of the leadership, the response was “beyond saying that the leaders of the group are concerned citizens from Toms River, Jackson, Lakewood, Brick and Howell we are not disclosing our identities. We have serious concerns about the targeting of people and their employment, a tactic used successfully in the past, and most certainly we are all concerned for our safety…”

As to the origin of Ocean County 2030, the group responded that “discussion of the documentary began in October. We believed that it was necessary to tell a story of what was, what is and what will be based on the projected population growth in the Lakewood community provided by Aaron Kotler, chief executive officer of BMG (Beth Medrash Govoha).” Rabbi Kotler is the president of the Beth Medrash Govoha (also known as the Lakewood Yeshiva.)

Regarding further details of the documentary and how it will be presented the group responded that “the documentary is 53 minutes at present. We are going through some revisions based on the recommendations of a small group that has viewed it. The tentative release date is now set for March 1.

“The documentary will be simultaneously released on YouTube and Facebook. There is commitment from a national media outlet to feature the documentary on an upcoming show, we are by contract forbidden to disclose which,” the representative stated.

One point of criticism expressed during the Feb. 13 Jackson Council meeting and press conference was the use of footage of children seen in one of the trailers for the documentary. The trailer featured elementary school age children in front of a metal fence. The children followed the photographer who shot the scene behind the fence.

Critics noted the imagery and the use of children’s images without permission of their parents. When asked why this decision was made and was this footage shot at a school in Lakewood the representative responded that “the actual video can be found on YouTube, it was posted six years ago. We used it with permission of the video owner.”

The representative added that “we do believe that calling into question the use of children during a segment of our video discussing children is sanctimonious at best. A deflection, nothing more.”

The Jackson Times also asked the group if any effort had been made to meet with members of community groups or with municipal leaders in Lakewood, Toms River or Jackson regarding the stated development concerns within those municipalities.

“We attended plenty of planning board, zoning board, town council/committee meetings and our voices were largely being ignored,” the representative said.

The group was also asked whether it was an organization or classified as social media group. “At present we are nothing more than a loosely formed group with a number of stated purposes. We are discussing how best to form an official presence, most likely a 501(c)4.”

When asked further about the group’s reluctance to disclose the identity of those involved in the group, a criticism by Sen. Robert Singer (R-30th) during the Jackson press conference, the representative stated that “criticism from Bob Singer about transparency rings a bit hollow with us. There are serious questions about where he actually lives and whether or not his service in the Lakewood district is appropriate.”

Kiwanis Teams Up With Fire Company For Food Collection