The final track piece of Jersey Devil Coaster, which according to Park officials will be the world’s tallest, longest, and fastest single-rail coaster, was placed on January 25. This “topping off” 130 feet in the sky marks the last track construction on Great Adventure’s highly-anticipated scream machine, which is set to open later this year.

TCN & Co. iron workers based in Marlton, built the coaster and were joined by the ride’s manufacturer and Six Flags project supervisor in signing the last piece of orange steel before it ascended to its final resting place atop the extreme, 87-degree, vertical drop.

Construction, maintenance, and engineering teams will focus on installing the chain link lift mechanism that will hoist riders to the top of the 13-story hill.

A ride station which will include a moving platform, transfer track and maintenance area will also be built. Other jobs include installing ride controls and performing some extensive ride testing.

Before the Jersey Devil can excite riders it must first be inspected by the state and receive its safety certification. All phases will be completed prior to passengers boarding attraction later this season.

The ride reaches 13 stories and will run at speeds up to 58 miles per hour. Passengers will soar single file through the dark and foreboding woods over 3,000 feet of track.

The Jersey Devil was inspired by the legendary Pinelands mythology. It will feature five intense elements including three dramatic inversions.

Other key features include trains of 12 passengers each sitting low and inline style (one rider per row) with their legs straddling either side of the monorail track; 3,000 feet of soaring, single-rail, I-beam track; tension-building ascent up a towering, 130-foot lift hill; a steep 87-degree first drop and overbank cutback; plus three dramatic inversions including a 180-degree stall, raven dive, and zero-gravity roll.

An opening date for the coaster will be announced. For more information, visit sixflags.com/greatadventure 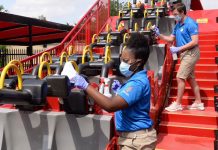