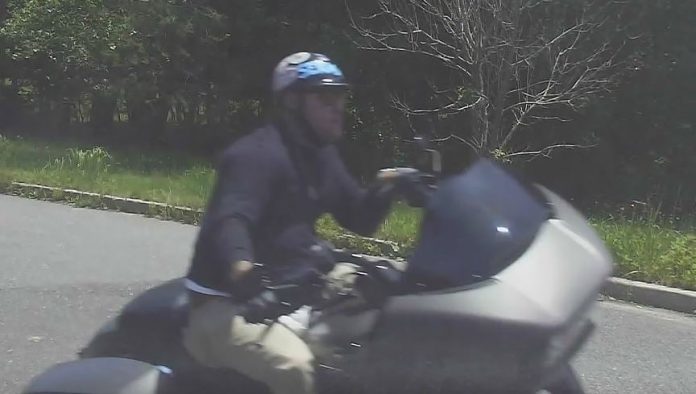 JACKSON – The Jackson Police Department is asking for the public’s help identifying a man who broke into a home and fled on a motorcycle.

On June 10, a resident on Leesville Road reported to police that an unknown male broke into their home. A teen female was home alone when the incident occurred. The man repeatedly knocked on the door and rang the doorbell before kicking down the door. While hiding in a room, the teen called 911.

After entering the home, the suspect went directly to her parent’s bedroom and then walked down the hall to the room the girl was in. The suspect immediately ran out of the house after discovering the teenager was home. He quickly fled the scene on a motorcycle.

Police Officer Daniel Scharff found the suspect on the motorcycle traveling on Leesville Road, approaching him from the opposite direction at a high speed. When Scharff attempted to pull the suspect over, he refused and initiated a vehicle pursuit.

The pursuit continued, with the suspect driving on multiple yards to avoid police. The suspect was reaching speeds past 90 miles-per-hour. Officers last saw the man turning onto Toms River Road (571) northbound before they lost sight of him. At that time, police terminated the pursuit for safety reasons.

The suspect is described as a white male wearing a long sleeve black shirt, tan pants, gray gloves and a helmet with multiple stickers on it. The motorcycle was determined to be a gray or silver Harley Davidson Road Glide.

If anyone has information or can identify the suspect, to contact the Jackson Police Department at 732-928-1111.