TOMS RIVER — While other drugs treat symptoms of Alzheimer’s, the new medicine, called Aduhelm, is the first to attack what some believe is an underlying cause of the disease and slow cognitive decline.  It does so by eliminating clumps of a toxic protein believed to destroy neurons and cause dementia. Aduhelm is not a cure for Alzheimer’s, and it doesn’t reverse the disease’s progression.

“This historic moment is the culmination of more than a decade of groundbreaking research in the complex field of Alzheimer’s disease,” Biogen CEO Michel Vounatsos said in a statement. “We believe this first-in-class medicine will transform the treatment of people living with Alzheimer’s disease and spark continuous innovation in the years to come.”

To many patients and their caregivers, Aduhelm’s approval provides hope for a better life, despite the drug’s limitations. Alzheimer’s affects nearly 6 million people in the U.S. Current medicines for the disease have only short-term effects on symptoms and bring side effects that make them unusable for some patients.

Aduhelm offers the promise of treating the root cause of the disease. The treatment, administered intravenously once a month, is approved for all patients with Alzheimer’s disease. Clinical trials tested it only in patients with early-stage Alzheimer’s who have had a PET scan confirming the presence of amyloid in their brains.

This approval is significant in many ways. Aduhelm is the first novel therapy approved for Alzheimer’s disease since 2003. Perhaps more significantly, Aduhelm is the first treatment directed at the underlying pathophysiology of Alzheimer’s disease, the presence of amyloid beta plaques in the brain.  The clinical trials for Aduhelm were the first to show that a reduction in these plaques—a hallmark finding in the brain of patients with Alzheimer’s—is expected to lead to a reduction in the clinical decline of this devastating form of dementia.

Locally, Advanced Memory Research Institute of NJ, located in Toms River, NJ was the leading center in the Northeast for the aducanumab trials. AMRI is the leading center on all cutting-edge research for the region. If you would like to learn more about this new drug or learn more about Alzheimer’s disease contact them at 732-341-9500 or at amrinj.com 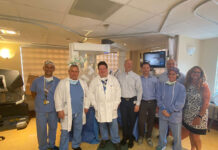