JACKSON – Township officials are awaiting word from Altice, the parent company of Optimum in response to a complaint the township filed last month with the Board of Public Utilities citing poor services by the firm.

For months, customers have noted problems with internet service and complained to the township. Jackson, Howell and at least two other communities in the state have taken action with a complaint to the BPU.

During the most recent council meeting, resident and Zoning Board member Nino Borrelli inquired about the status of the issue. “Thank you for filing a complaint with State Board of Public Utilities concerning the service provider Altice/Optimum. I was wondering if you have any updates about that? How long does it normally take to hear back after filing such a complaint?”

Business Administrator Terence Wall said that the township had not heard back from the firm yet. “It is an unusual situation so there is no standard to what we would expect.”

“Hopefully the rate payers of Jackson will receive the consistent service that we pay for and deserve,” Borrelli said.

Janet Meahan, the vice president of Communications, for Altice/Optimum did respond to a recent article in The Jackson Times that reported on the complaint made by the township as well as a resolution calling for the firm to lower rates to customers based on what was stated as poor service by the company.

Altice had been contacted for comment for that article but did not respond at the time.

Meahan issued a statement saying “Altice and Optimum have a longstanding relationship with Jackson Township in delivering advanced connectivity services to local residents and businesses, from investing in our network to deliver up to 1 gigabit broadband speeds to launching products like our Altice One entertainment platform and Altice Mobile wireless service.”

She added, “we are committed to delivering reliable service and support to the communities we serve and look forward to working with the council and the BPU to address any concerns.”

The Jackson Times responded further, asking what steps the company planned to take to address the complaints made by Jackson customers.  Meahan was also asked if a company representative might come to a future council meeting to publicly address the issue with members of the governing body and residents. She said that such a visit might be possible.

“In terms of our network, we’ve recently added capacity to the network in the Township of Jackson to enhance our broadband experience and are seeing improved performance as a result,” Meahan said.

Meahan added that “we look forward to working with the Township and its council to address their concerns.”

Last month, Council President Alex Sauickie outlined the complaint filed by the council with the BPU saying, “the town has in my opinion worked in good faith before filing this complaint. We did reach out to the management of Altice months ago in attempts to try to alert them to the concerns.

“They aren’t new concerns. They didn’t start with the pandemic. They were in existence before that. We did want to do right by Altice and see if we could work through their management. We also put a link on the Jackson Township website to allow residents to file their complaints directly with Altice which they in fact did,” Sauickie added.

The complaint charges that Optimum “is providing inferior cable television and internet service to its customers. Optimum/Altice USA is under its current franchise issue by the BPU. Service is slow, poor network connections exist and there is an inability to use ‘DropBoxes’ and Altice has not offered to reduce its fee for this service.”

Also noted by customers was their inability to speak to a customer service representative following long waiting periods and to get a concise answer as what the problem was and when it might be corrected.

Some customers said that when they did get to speak with a representative they were told their problem was “temporary” but that it persisted afterwards.

Sauickie said “we are also taking it one step further with resolution 337R-20. That resolution is requesting a 50% reduction in the fees that are paid to Altice for the residents going forward.”

Jackson is not the only community unsatisfied with Optimum’s service. Hamilton Township and Robbinsville in Mercer County also called for the BPU to start an immediate investigation into the firm’s services. Howell Township in Monmouth County also took action toward Altice after residents of that community expressed internet service provided by Optimum was unsatisfactory.

“Hopefully, they (the BPU) will take action regarding it. We do that in conjunction with other towns that have done it so hopefully we will see some action on that going forward,” Sauickie said. He dismissed prior comments by the firm that said that complaint issues were generated from conditions of the current COVID-19 pandemic.

It was noted that with more people at home using WiFi service it would slow down but according to the township’s franchise agreement, that excuse doesn’t stand up as other service providers are not having the same problems for their customers.

Resident Richard Egan said he was pleased that the township had filed the complaint to the BPU. He said he experiences problems three or four times a month. “It disappears on the computer. No service, no explanation. A day goes by, two days go by. He said representatives tell him, ‘we’ll get to you, I don’t know what to tell you’.” 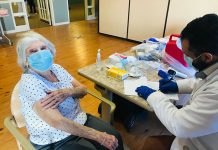