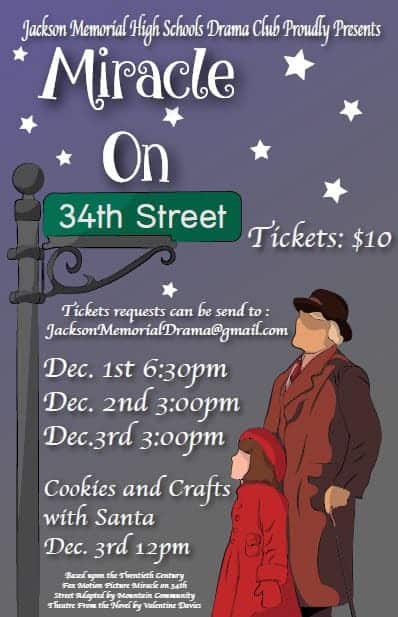 JACKSON – On Dec. 1-3, the Jackson Memorial High School Drama Club will be putting on a production of “Miracle on 34th Street,” with a special offering of “Cookies and Crafts with Santa’’ on Dec. 3.

“Students took leadership in this production by helping in every aspect of the show, from the acting to the creation of the set, running the crew and more,’’ said Play Director Cori Bott. “We hope the community will come out to see their hard work and to witness a heartwarming tale that teaches us the importance of believing in each other.”

Showtimes are Friday, Dec. 1 at 6:30 p.m. and Dec. 2 and 3 at 3 p.m. Tickets for the show are $10 and can be purchased in advance by sending an email to JacksonMemorialDrama@gmail.com or by purchasing at the door. The Box Office will open one hour prior to the show for each performance.

There is also a special “Cookies and Crafts with Santa”” event on Sunday, Dec. 3 at noon. Tickets for the Santa Meet and Greet event must be purchased in advance at a price of $15 Show/ Meet and Greet Bundle. Children can get their picture taken with Santa and the Elves, make photo frames, decorate cookies and have lunch with our cast.

The play is directed by Jackson Memorial High School’s New Drama Director Cori Bott, an alumna of the program, with support and guidance from Bobbie Allaire in Set Construction and Design.

The play is a production Adapted by Mountain Community Theater from the novel by Valentine Davies.

In this story, Kris Kringle, an old man who can no longer live in his retirement home, gets a job working as Santa for Macy’s. Kris exudes good will with Macy’s customers and the commercial world of New York City by telling parents to go to other stores to find exactly the toy their child has asked for. Seen as dangerous by Macy’s vocational counselor, Mr. Sawyer plots to have Kris brought to Bellevue Psychiatric Hospital, Kris ends up in a court competency hearing. Especially at stake is one little girl’s belief in Santa.

“This production is sure to help set our community into the Holiday Season with this heartwarming tale of belief, and holiday caroling favorites,’’ Bott said.