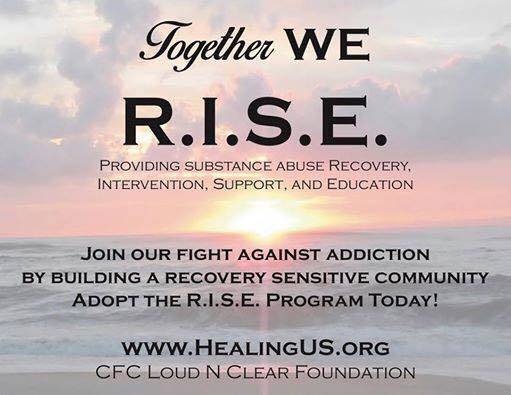 JACKSON – Mayor Michael Reina is inviting residents to a meet and greet event for the CFC Loud N Clear organization on March 9. The event will be at the Senior Center on 45 Don Connor Blvd. at 7 p.m.

CFC Loud N Clear is a non-profit 501c3 organization based out of Howell. It is an aftercare recovery program that offers prevention, intervention and recovery to people who have struggled with addiction.

Loud N Clear has made tremendous strides in Howell and would like to accomplish the same in neighboring towns. Howell went from being the number nine town on the top 40 list of towns with drug abuse, to no longer being on the list. Intervention, Support and Education, and encourages the whole community to get involved with the program in an effort to eradicate alcohol and drug abuse in the community. Loud N Clear plans to host family support groups, recovery meetings, school education, volunteer events and work programs.

The R.I.S.E program will be discussed at the meet and greet on March 9, as well as what the organization hopes to accomplish in Jackson.

Residents interested in attending should reach out to Marianne Kinsman at marianne@healingus.org.