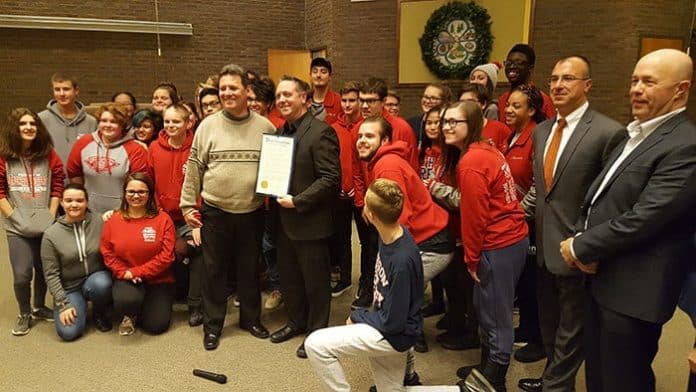 Township Police Officers Michael Grochowski and Theodore Kucowski were promoted to the rank of sergeant during the session and a large audience came out to observe Police Chief Matthew Kunz congratulating them and providing insight to residents about their accomplishments.

“They represent us well,” the chief said. Kunz said that Grochowski joined the department in 1998 and has served with the Ocean County SWAT (Special Weapons and Tactics).

The chief added that Grochowski was the 20007 and 2017 Jackson Police officer of the year and served the department as instructor of firearms and defense tactics.

“Your professionalism and how you carry yourselves each day is a credit to our department and our community. All we ask is that you mentor and steward what you know and apply it to our young officers,” Kunz added.

Council President Kenneth J. Bressi said “we are very proud of our officers. I feel it was a good move for the police department to promote them. You heard the resumes of these officers.”

Councilman Scott Martin said “what we saw tonight is the best we offer, special congrats go out to newly promoted sergeants. They do a great job.”

“Ted and Mike are among most honorable and kind individuals we’ve had on our department,” Council Vice President Robert Nixon said.

Martin had the honor of presenting a proclamation honoring the Jackson Liberty Lions Band for their 2017 achievements which included participating in the Philadelphia Thanksgiving Parade. Martin read off a long list of noted performances the band had made and honors they had received during the year.

Lions Band Director Scott Katona recalled a performance by the band during the summer “where we performed 90 degrees and 100 degrees on the Astroturf where but we pushed through and performed. It is a lot of work and dedication by the members of this band who always do a great job.”

Councilman Barry Calogero remarked that “our high school bands always shine. They do a great job in representing their school and our town.”

“I’m a band parent and I know just how much time they put into this. They do a great job,” Martin said.

Nixon said the band members are a fine example of students and representatives of the community.

“We can’t say enough about those in the bands and the coaches involved. The students have shown a lot of self-discipline. They make the town proud,” Bressi said.

In other business, it was noted that Mayor Michael Reina was happy to announce that electronic waste (e-waste) would once again be picked up by the department of public works. That includes laptop monitors, television sets and other electronic waste.

Bressi said that by reinstituting the pickups it would help the “disposal of such items properly.” He also said that the move would help with bulk rate and recyclables.

Business Administrator Helene Schlegel reported that during a review of programs of the township recreation department “some activities need to be removed from recreation leagues that are no longer supported. Some new programs have been successful but the current fees are not covering the cost.”

She said some of the summer programs available would change and fees adjusted as some of the programs “did not cover the employees we need. All the money we collect stays in the recreation trust. If we see we are making money we have an obligation of backing down. There is no intent to make money through the recreation program,” Schlegel said. She added that an ordinance should be ready for a first reading at the council’s next meeting.

During the public comment period of the session Schlegel was asked whether the township was considering a $6 million purchase of new communication equipment for the police department.

“I can’t confirm that but there have been discussions,” Schlegel said noting a loss in police radio frequency.

“They have been working with the county for a new change in frequency, we aren’t at that point yet and we will see if this is our only option. I’m trying to find other options speaking with other (police) departments in the area. I can’t confirm or deny it at this point,” Schlegel said.