JACKSON – While other police departments around the state are adding conducted energy devices – “stun guns” – to their arsenals, Jackson Township Police don’t expect to see any in use by their department until at least the end of 2017, possibly into the new year.

Lakehurst Borough’s two sergeants completed CED training and were armed with their Taser X2s in February. Manchester Township sent officers to the prosecutor’s mandatory CED training course, and expects its department to be using CEDs by the spring.

While Jackson’s department does not yet have CEDs, Officer Vincent Rubio is a firearms instructor with Jackson police and is on staff at the Ocean County Police Academy.

“He was selected when {CEDs} were first authorized by the state to attend an instructor course for conducted energy devices so he could instruct officers in the county,” Captain Steven Laskiewicz told The Jackson Times.

The state attorney general last year changed rules regarding CED use, making them applicable for local police use. The Ocean County Prosecutor’s Office approved their use earlier this year. The Office held training for 20 officers the last week of February.

Officers must be trained to use CEDs, and get recertified each year. An officer using a CED must either wear a body camera and use a “Taser Cam,” which records the interaction between the police and the person aggressively resisting an officer. The CED is to be used to prevent a situation from escalating where deadly force may be used.

The CED works by deploying two probes that latch onto a person’s clothing. The person is shocked by the 50,000-volt electrical current that travels from the device down the wires, causing what those on the receiving end call a full-body Charley horse, thereby incapacitating them. Officers can then restrain them.

Some news outlets have reported that CEDs have led to injuries or death in rare cases. Amnesty International has urged even stricter limits on CEDs use. However, police said with proper training, they are a safer alternative. Should the barbs hit a sensitive area or prove difficult to remove, the EMTs will be called in. Severe cases, although unlikely, will require a trip to the emergency room.

“We do not currently use them and the chief is seeking to have them included in one of the upcoming budgets as they are a considerable expense,” Laskiewicz said.

Manchester Township is purchasing 20 Taser X2s with Taser Cams for $51,000 under a state contract. 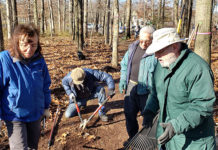