JACKSON – When asked ‘what are you doing?’ township resident Brandon Horwin has plenty to say. He’s been busy working and co-hosting a star-studded podcast series.

Horwin and his co-host Sophie Williams of Baltimore, Maryland, are both BroadwayWorld DC contributors, and seniors at Catholic University in Washington, DC. They are also both excited about future installments of their new podcast series “Whatcha Doin’ with Brandon Horwin and Sophie Williams.”

From launch, the series has featured a variety of theatre and entertainment stars from DC, Broadway, and beyond. With the assistance of Eleanor Holdridge and an advisory board of CUA Drama educators, Horwin and Williams successfully launched the series in early November.

Holdridge joined them as their very first guest. Since that time, they have gone on to have multiple interviews with names such as Luis Salgado, Arturo Porazzi, Michael Berkowitz, Beverley Bass, and Tony Award Winner Debbie Gravitte and with an impending episode from Caesar Samayoa and De’Lon Grant.

Horwin said, “through these conversations, audiences have gained insight as to how these artistic professionals are handling the pandemic, how they are keeping the creativity alive, and what advice they have for aspiring professionals at this time.”

The podcast also features “some cool anecdotes from their career in theatre, name dropping Julie Andrews or recalling when they met Sondheim or Hillary Clinton,” Horwin said.

“We wanted to create something during this time that not only inspires us, but helps inspire others to stay connected and engaged, while continuing to pursue their dreams. The series releases weekly episodes that feature new guests from all disciplines of theatre, entertainment, and film spanning from New York, New Jersey, Washington, D.C., Los Angeles, and beyond,” Horwin added.

During the premiere episode Horwin asked Holdridge about how she got started in directing and how she also became a theatrical educator. “How did those two journeys begin to mend?” he asked her.

“Some people are like ‘this is what I really want to do.’ Some knew their vocation since Junior High School or something but I didn’t. I didn’t know I wanted to direct. In tracing it back when I was a little kid my mom ran this company called Cadman which produced spoken word records, back in the day when records were records and she was in the recording studio,” Holdridge said.

“I grew up in a recording studio with people like Lawrence Olivier and John Gielgud and so I grew up around hearing Shakespeare – not seeing it,” Holdridge said.’

She added her mother would play these records a lot and while listening, she would imagine the worlds that these stories took place in. “At that age I didn’t understand all of the Shakespeare but I understood the story and the language and so I started to create pictures in my head.

“I think that early process of exercising my imagination was like a little time bomb waiting to happen,” Holdridge added.

“We are so thankful and so that all our listeners know, Eleanor was just an extremely helpful and a great pioneering force behind getting this project up on its feet,” Horwin said.

“I am so excited about the program and can’t wait to see what happens next,” Holdridge said during the premiere podcast.

The duo released a few more interviews before the end of 2020 that included some special guests. He and Williams also plan to make some special announcements in 2021. 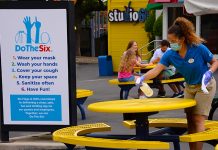