JACKSON – The Jackson Chamber of Commerce celebrated its 50th anniversary with local dignitaries and business leaders June 3 at the welcome center at Jackson Twenty-One.

The chamber has grown from about 30 members in 1967, when, as former chamber president John McGeehan described it, Jackson was a “sleepy, rural community,” to today, with the chamber boasting more than 200 members.

“We’ve become a force in the state of New Jersey,” McGeehan continued, noting it’s always been about location, location, location. Jackson’s easy access to the Garden State Parkway, the New Jersey Turnpike and Route 195 puts the township “in a great position for commerce, not to mention continued building. People are making this their community of choice to live in, to raise a family in, to do business in.”

Mayor Michael Reina, along with council president Kenneth Bressi and council vice president Ann Updegrave, offered a proclamation to the chamber on its 50th anniversary celebration.

The proclamation read that the chamber was established after Jackson’s first growth spurt in the 1960s, and that today its membership list has grown to an “impressive list” of more than 200 local and surrounding-area businesses. The chamber’s fundraisers provide scholarship for Jackson Memorial and Liberty high school students.

“And whereas, one of the chamber’s most important roles is to promote Jackson, to advocate for all businesses, the Jackson Chamber of Commerce has been an important part of the community throughout the years, and has combined greatly to enhancing our quality of life and improving business relationships,” Reina read.

“I want to congratulate the chamber on its 50th anniversary. The work you do here with the chamber is so important,” Thompson said.

Dancer said he, Thompson and Assemblyman Robert Clifton had the state legislature pause in its deliberations to commemorate the chamber’s 50th anniversary. Dancer didn’t read the resolution at the chamber celebration, but summarized it for the party’s guests.

“Basically, the New Jersey state legislature – that would be 40 senators and 80 assemblymen, believe it or not, 120 of us can agree on something in the state, but we are certainly in agreement – that we want to commemorate this occasion and congratulate you for all you do to make Jackson Township not only a business-friendly community, but all your efforts for business attraction and retention, trying to keep our businesses growing in the community of Jackson.”

Chamber president Virgil Hollender offered his congratulations to the chamber and its past presidents, some of whom were in attendance.

“These last 10 years we’ve really focused on promoting our businesses through advertising and through as many free events as we can for business card exchanges and networking,” Catherine Gross said when asked how the chamber has evolved over the years. “We’re very committed to networking and using each other’s businesses not only for the community, but each other.”

The chamber continues to print maps where the public can find its members, and today uses social media to promote its members as well.

“I chose Jackson for a specific reason. I lived here first, as it was incredibly affordable. It was natural to open my business here when it was time to open my business,” Galvin said. He served with Bressi on the Jackson Township council until 1993, and after his term was up, decided to open his practice. “Jackson still has incredible capacity. The first thing about Jackson, as they say in real estate: location, location, location. Jackson’s in the middle of the state, we’re located on I-195 and it’s a quick route out to the Turnpike and to the Parkway. So any business that we can get or create here, they’ll have easy access to every place they have to go to in the state.”

The chamber has worked with governing bodies to make Jackson more business-friendly, McGeehan said. Together, they were able to grow ratables, which takes some of the tax burden off homeowners.

“That was the big thing, trying to increase the ratables in Jackson to make it better,” he said. “Most members of the chamber, they’re Mom and Pop businesses. They live here in Jackson. They pay taxes as homeowners. They also pay taxes as business owners. So, they have a vested interest in helping to see the business community thrive.”

The Jackson Chamber of Commerce can be found at jacksonchamber.com 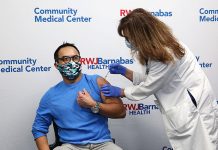