Home and garden centers like Lowe’s are exempt from the order that closed all non-essential businesses. Three men were reported to be shoplifting from stores in the area, and had made their way to the Lowes in Howell on April 7, police said.

Civilians detained the three suspects who had attempted to steal more than $2,000 worth of power tools. Police secured them in their patrol cars. On their way to the station, one of the suspects said he had tested positive for COVID-19. Police then confirmed it with the health department.

Since the individual had been in the same vehicle as his two accomplices, it was assumed that all three were positive. Two suspects were from Toms River and one was from Jackson.

None of the suspects were wearing masks or other protective equipment in the store, police said.

The four officers were treated for exposure, police said. They were placed on administrative leave and must quarantine at home.

“If not for privacy rights under HIPAA, their names would be announced. Normally, we would have publicly shamed them for their criminal and highly negligent behavior,” Chief Andrew Kudrick said. “This is another example why it is so important to abide by the ‘Stay at Home’ order. If you need to go out, wear some sort of approved respiratory mask or facial covering. There are some out there like these three who don’t care about how their conduct affects you. Even if it results in you becoming seriously ill.”

All three were charged with 3rd degree theft and released from headquarters. 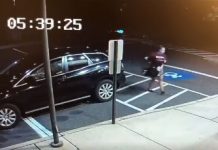