HOWELL – Police have arrested two suspects in an Aug. 4 burglary.

Two burglars broke into a Lanes Pond Road residence while the homeowner was at work.

The homeowner viewed the two suspects inside his residence via surveillance system.

Howell Police say they arrived within two minutes of being contacted by the homeowner, but the alleged burglars had already left. Police said they learned there was a significant delay in the video feed to the resident.

Police said they will be releasing more information shortly. 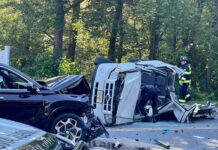