HOWELL – A Howell High School student is “changing the statistics” with his very own organization to help with issues of bullying and suicide, a project inspired by the memory of a close relative.

Shane Reitsma, a junior at HHS, started an initiative entitled “Change the Statistics” that encourages students to “look out for one another with constant offerings of conversation, support, and kindness to help anyone struggling with bullying, anxiety, and social isolation,” according to the Freehold Regional High School District.

Reitsma’s project gained so much momentum that he was even featured recently on CNN as a Positive Athlete. CNN’s Positive Athlete program “celebrates student-athletes across America who have accomplished the extraordinary by overcoming difficult circumstances, giving back to their communities, or simply having an infectious positive attitude,” according to their website.

Reitsma is a long-time wrestler who suffered a great emotional loss with the suicide of his uncle in 2017.

“He was like a father to me…it’s just the worst feeling, just those constant questions of why, what could I do to help,” stated Reitsma in the CNN feature.

Reitsma’s mother referred to his relationship with his uncle as the “older brother, best friend, father figure” type.

While he understood his uncle struggled with PTSD from his time spent in Iraq, he never thought suicide a possibility. “There was just no signs at all,” Reitsma told CNN.

Although suffering a great personal loss, Reitsma did not let this hinder him from helping others and acknowledging that others might be experiencing something similar.

“Suicide is not something people want to talk about,” said Reitsma, so he is making an effort to alter the stigma on it with his organization “Change the Statistics.”

This initiative raises money for those who might be suffering from suicidal thoughts but might not have the funds or means to get the help they need. Reitsma’s organization has already sold shirts and hosted a 5K run to bring in money for the cause.

In an interview with CNN, Howell Alliance Coordinator Christina Riddle noted that “Change the Statistics” helps students start a dialogue, the first step to getting help. “Help is key and if you don’t know it exists, you’re stuck by yourself,” she added.

Since the project began, it has gained support from tons of students who want to be a part of the cause. The Howell Alliance has even donated $1,000 to keep the message alive.

Howell High School’s principal Jeremey Braverman told The Howell Times that Reitsma is a tough wrestler with a heart of gold who is “a leader on and off the mat.”

“We’re extremely proud of Shane,” said Braverman, noting that he is not only a great athlete, but also a well-rounded student and young man.

“Change the Statistics” has not only garnered a significant following of students, but has also drawn attention from other organizations.

On Nov. 25 Reitsma tweeted: “Great meeting @philip_m_ohara of Hazlet’s Hope Network, two organizations joining forces to save lives! We are looking to put together a wrestling tournament in the offseason season to raise awareness for Mental Health, Suicide Prevention, Addiction, Recovery, and Prevention it is going to be called FIGHT FOR YOUR LIFE.” 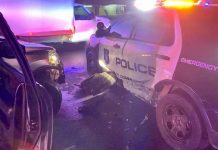 Driver Admits To Texting Behind The Wheel After Hitting Patrol Car