HOWELL – If you’ve ever wondered whether or not a trail could connect the state capital on the west side of the state all the way to the beach, the answer is – it can.

The Friends of the Capital to the Coast Trail recently held a meeting to put legs on their project to do just that: build a 55-mile-long multi-use trail that would run from the City of Trenton to the Borough of Manasquan.

Over 45 people representing seven communities attended the meeting, held on a bright and sunny August morning in the Administration Building of Allaire State Park.

Fred Lockenmeyer gave those in attendance a history of the trail, which he developed the idea for alongside his friend, Dr. Rudy Buser. The two made their case for it back in 2001 at the Spring Meadow Golf Course in Wall to community, county, parks & recreation and state officials, where he said it was “extremely well received.”

The planned trail would travel through 12 towns, two state parks, five county parks, one federal park and one state college – Mercer County College – with 85 percent of its path off road.

While the trail got off to a good start and $3.5 million in funding was received by Manasquan, Wall, Howell, Robbinsville, West Windsor, Mercer County College and Trenton, very little money has been received over the past four years.

According to a map provided by Lockenmeyer, at the end of 2013, nearly 20 miles of the trail had been completed. In Monmouth County, that includes an area in Manasquan Reservoir County Park, two miles in Allaire State Park, and another five miles that pick up on Hospital Road and end at the coast, as planned, on the streets of Manasquan.

Much of the meeting was dedicated to rallying volunteers around the trail to support it in a variety of ways, such as:

Lockenmeyer said that numerous people signed on as active volunteers to take on the above activities and do their part in getting the trail moving forward again.

The goal is for all eight Monmouth County towns that the Capital to the Coast Trail funnels through to each have their own group of volunteers. Each group would then have a chairperson to serve as a liaison to their town council, meeting at least once a year to discuss mutual concerns and progress.

Peter Hageman, a resident from Point Pleasant Borough, showed strong support for the Capital to the Coast Trail at the meeting, citing an increase in both young people and adults riding bicycles around town. He said he would like to see more bike markings on local roads for these riders, more bike racks throughout the Borough and stricter enforcement of the state’s bike helmet regulation.

The meeting was attended by officials from Howell and Manasquan, as well as Cyndi Steiner, Executive Director of the NJ Bike and Walk Coalition.

Steiner was positive in regards to the amount of grant money available to communities for bike trail development and enhancement, and that often, townships end up not applying for these grants. She offered her assistance in helping the Friends of the Capital to the Coast Trail navigate the grant application process.

Manasquan Councilman Jeff Lee volunteered to be an active participant in efforts to complete the trail.

Councilwoman O’Donnell told The Howell Times she attended the meeting because she hopes to make Howell’s rural roads more bike-friendly, and supports grants to develop spaces like Bear Swamp Natural Area, which is only a few short miles from the Manasquan Reservoir.

“Probably one of our biggest obstacles is Bear Swamp, which we would like to continue,” she said, adding that there is horse riding there now but that hiking should be enjoyed, too.

She said the council is lucky to have Herrman on their side to stay on top of grants that are available for trails and open space. 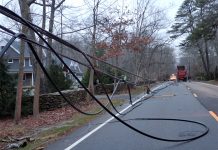 Are Traffic Issues In Farmingdale Becoming A Bigger Problem?