For 23 years, Micromedia Publications has been a source for news in the community. Ever since the first edition of The Manchester Times, dated April 18, 1995, we’ve published letters to the editor on a variety of topics ranging from local issues to international affairs. For clarification purposes, Wikipedia defines a letter to the editor as “a letter written to a newspaper, magazine or other periodical about issues of concern to readers, usually intended to be published in the paper/periodical.”

Everything from nose hair to politics – no subject is off limits and we get a wide array of submissions. Sometimes we make the decision not to run a letter that may be riddled with hate speech, racist, homophobic or blasphemous ramblings. But the company has always run letters as a common practice. In fact, our whole mission statement is based on the importance of the community and serving as a voice to our readers. Part of that service is to allow for opinions to be expressed and then discussed either through additional letters or online social media posts.

You can imagine my surprise when I saw some of the colorful comments posted on our social media pages after we ran a letter in which the AUTHOR called for President Donald Trump’s impeachment. Did we agree with the letter? Maybe, maybe not. We are journalists first and don’t take sides (despite many major media outlets today doing so). Was the letter the opinion of the writer? Yes. Was there a disclaimer stating that the letter was the opinion of the writer? Absolutely. Did people read that disclaimer? Obviously not. 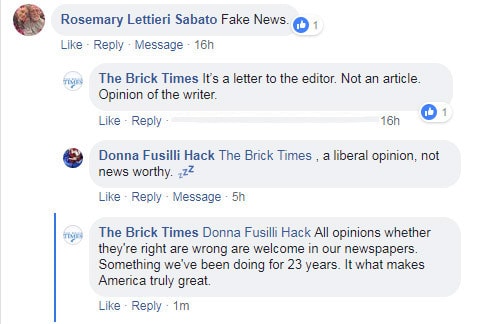 Do we run positive letters regarding President Trump? Yes, yes we do. Do we get a lot of submissions? Frankly, no, we don’t. That is certainly surprising to us in the newsroom as we do live in a Republican county. If we received more, we would certainly run them. 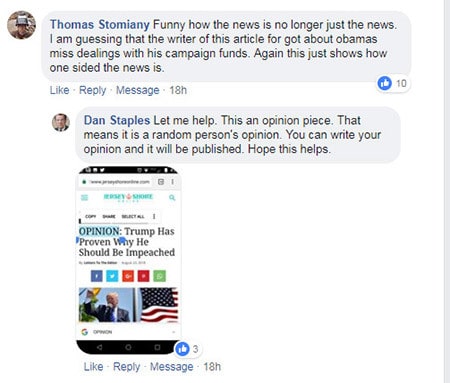 I will say this once again – this time both in the printed papers and online: we welcome ALL letters from all sides of the political aisle. Our newspapers are fair and balanced. We don’t take sides. We don’t play favorites. 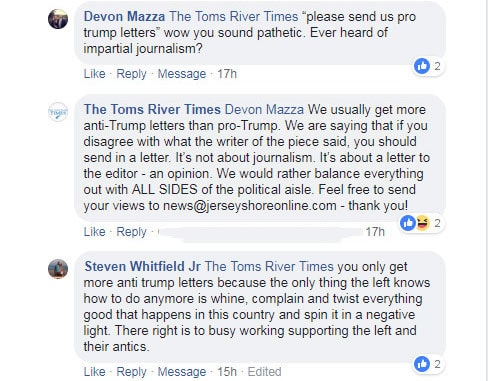 It seems that ever since the 2016 election, the amount of negativity from people is stronger than ever. Regardless of your political views and ideology and who you support to lead this great country, remember that we are all human beings with a right to life, liberty and the pursuit of happiness. There’s certainly a way you can express yourself without name calling and being utterly hurtful. Someone’s political view doesn’t say everything about that person’s character. I’ve seen a lot of hate speech from all sides and it’s really a shame.

We should all want our country to be great and for us to remember all of the liberties we have thanks to our founding fathers and the brave men and women who have served our nation. We welcome a difference of opinion without fear of retribution or blow-back – just try and be civil and know the letters to the editor will continue to be a permanent staple of the Micromedia newspapers and Jersey Shore Online.

So with that, if you would like to send a letter, e-mail it to news@jerseyshoreonline.com

Thank you as always,