BRICK – Rita Ciocca and about a dozen other residents from the Normandy Beach section of Brick asked for help with streets that flood frequently and with such depth that school buses, mail and package delivery vehicles and passenger cars cannot pass through.

“It’s really become uninhabitable, and I live there year-round for this situation,” she said. “It’s become quite critical to those of us who have to live with it.”

This was the third council meeting the barrier island residents have attended to ask if the township has any plans for mitigating the flooded streets.

Business Administrator Joanne Bergin provided an overview of a meeting that she, Mayor John G. Ducey, Councilman Art Halloran and some residents of Normandy Beach had with the Federal Emergency Management Agency on December 18.

“We had extensive discussions on potential strategies to help alleviate the problem in the short-term, while we examine long-term viable options,” Bergin said. “We absolutely consider this an issue for our town. It’s a global issue that is having local impacts, so that makes it more challenging.”

The township wants to partner with larger agencies to create long-term strategies for the problem, she said.

Since the December 18 meeting, the township has done some test-capping where bladders were placed in pipes and the number of pipes was expanded, which helped to a certain degree, Bergin said, but it isn’t a solution since groundwater is still coming up.

Also, the administration is committed to putting funds into the 2020 capital projects budget for flapper valves for Normandy Beach and several other low-lying areas on the mainland that are having the same problem, Bergin said.

In addition, when the first Land Use Committee meeting of 2020 convenes, a discussion is planned on some of the legislative pieces that might address some of the problems, she said.

“Whether it be bulkhead elevation, or other zoning-type of regulations that we have to change, that might have an impact so we are intending to do that,” Bergin said.

She said the township would like to apply to FEMA for funding, but only after setting aside the time and energy to be strategic with how that is done. The key to getting any money from FEMA is to successfully have a rating on a cost-benefit analysis, Bergin explained.

FEMA needs to see a cost savings, the business administrator explained. If they are funding several million dollars in a long-term project, the result would need to be fewer FEMA claims by residents. The street flooding in Normandy Beach is not generating FEMA claims, so that presents a challenge, she said.

“So we have to pitch it in a way that, or apply for certain type of funding that doesn’t have the emphasis on the cost analysis, but if you’re FEMA you’re going to be looking at saving money,” Bergin said.

The township has identified and looked at professional engineering firms that have had a successful track record with projects along these lines: conducting cost-benefit analysis in applying for FEMA funds in the large scope of different FEMA funding programs that are available, she said.

The administration met with APT Engineers, who has had success in Ocean City, and took the lead in creating pump stations, dredging, and other projects there that would be relevant to Brick Township.

“The engineering firm could help to create a strategy that would put Brick in the queue for the funding that would create projects that would work,” she said.

Bergin said they have asked APT for a proposal after meeting with residents in the areas that flood during the worst of times and the best of times so they get to know the landscape and conditions and come up with a strategy that would be successful for neighborhoods that are suffering, Bergin said.

Normandy Beach resident Steve Timoni of Broad Avenue said the 70-year-old drainage system there has never been repaired, replaced, or looked at in that period of time.

“Before we come up with a plan or strategy, there is a very simple question: where is this water coming from?” Timoni asked. “Is it rainwater that’s not adequately draining? Is it tidal water, backing up through those pipes? Is it groundwater, coming up through the surface? Is it the bay that’s breaching the bulkhead and the beach?”

The origin of the water has to be determined before millions of dollars are spent, Timoni said.

The next council meeting will be on Tuesday Jan. 28 at 7 p.m. 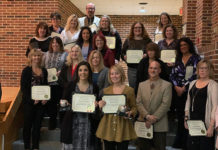