BRICK – The Riverwalk Shopping Center will have a new tenant this fall as Lidl grocery store takes over the space that has been vacant since 2009 when Cost Cutters closed. For years the site was known as the Kennedy Mall shopping center.

Germany-based Lidl is a global grocery chain of over 11,000 stores. It is significantly expanding into the United States, said attorney Laura D’Allesandro, who was representing the grocery store chain at a recent virtual Planning Board meeting.

Lidl received their conditionally-exempt site plan approval from the township back in September of 2019. They were once again before the Planning Board for approvals for an amended final site plan and variance relief for proposed signage at the 13-acre shopping center.

During her overview, D’Allesandro said that her client is proposing two free-standing monument-style signs. She said the proposed signs conform to the Brick Township ordinance requirements for height and size. The requested variances relate to their proposed location and number of free-standing signs.

The engineer representing Lidl, Ben Crowder, said that Lidl has constructed new buildings and they have also taken over all or a portion of an existing vacant space since they started their expansion into New Jersey in 2014-2015.

Lidl (which rhymes with needle) will be taking over about 24,000 square feet of the existing vacant space in the Riverwalk shopping center, he said.

Crowder said Lidl has made some improvements at the site to comply with the Americans with Disability Act, has added a loading appendage in the rear of the building and a trash enclosure, and has completed some utility upgrades to service the store.

The site is currently under construction and is slated for a grand opening around October this year, he said.

The shopping center is located at the intersection of Hooper Avenue and Brick Boulevard, which are county roads, Crowder said. On May 6, the Ocean County Planning Board approved the signs and their proximity to the rights-of-way, he said.

Using an engineering metric, Crowder explained the need for the quantity and positioning of the monument signs. He also delved into the minutiae of where the signs should be placed as they relate to surrounding signs, visibility, traffic and more.

Lidl is requesting interior-lit, LED-lighted monument signs on Hooper Avenue to “gather the westerly traffic,” and on Hooper Avenue opposite the Brick Garden Apartments, which he said was important to demarcate access to the site from that road.

The engineer said Lidl also wants to install signage above its entrance and on the sides of the building.

D’Allesandro said that as a final point of clarification, Lidl is in compliance with the size and height of the monument signs; variances were only needed for setbacks and for the number of signs.

Planning Board members unanimously approved the final site plan and variance relief for the signs.

Lidl has stores in 32 countries and employs some 287,000 people globally. In June 2015, they established their U.S. headquarters in Arlington, Virginia, and has 95 stores in nine states along the east coast.

One recently opened in Lacey. 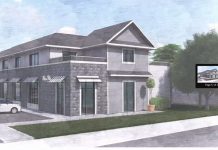 Governor: Everyone Stay Off Roads, Report Any Power Outages