BRICK – The township was named for Joseph W. Brick, an astute businessman who established himself as a leader by taking a failing iron forge, which was located in present-day First Energy Park in Lakewood, and turning it into a successful business that he operated from 1832 until his death in 1847.

Lakewood, which was part of present-day Brick, was originally called “Three Partners Mill” when it was settled by Dutch and English sawmill operators. The first sawmills were located where Lakes Carasaljo and Manetta intersect in the Lake Shenandoah vicinity, and at the south branch of the Metedeconk river.

Lumbering was the main source of income for early settlers until it was discovered that the soil was rich in ironstone.

In 1814, Jesse Richards of Batso organized a company to develop the ironstone. Soon “Three Partners Mill” became known as “Washington Furnace.” By 1832, the business started to fail, and that was when Joseph Brick purchased the iron forge, along with thousands of acres of forest in what is now Lakewood, Jackson and Brick, plus considerable property in Monmouth County.

The forest provided the necessary fuel to operate Brick’s “Bergen Iron Works,” once again renaming the area from “Washington Furnace.” He converted local bog ore into pig iron which was used to manufacture water pipes for New York City.

The waterpower needed to run the iron furnaces (and the sawmills that preceded them) was obtained by damming the cedar swamp streams, causing them to broaden out into lakes, which was how the two lakes in present-day Lakewood were formed.

The village of “Bergen Iron Works” included a store, a hotel, a post office and eventually a train station. It even issued its own currency. By 1844, nearly all of the 200 people living in the village were employed by the Works.

The railroad had not yet come to the area, so the products of the iron works were hauled by six team wagons over heavy planks laid over the sand. “Plank Road” (now Cedar Bridge Avenue) led to Furnace Dock in the Laurelton section of Brick, where they were loaded into scows which carried the pipes and other products down the Metedeconk River to Bay Head.

There, they were placed aboard schooners bound for New York and other areas by way of an inlet that was located by present-day Chadwick Beach.

When Joseph Brick died, his property was passed on to his three daughters and two sons. In 1850, citizens of the “Bergen Iron Works” agreed to change the name of the village to “Bricksburg” to honor Mr. Brick. The bog-iron industry began to decline as new foundries opened in Pennsylvania.

The two lakes adjacent to “Bergen Iron Works” were named after Joseph Brick’s family members. Many believe that “Carasaljo” is a Native American name, but it was created by combining the names of Brick’s three daughters, Caroline, Sarah and Josephine.

Lake “Manetta” was named after Brick’s wife, Margaret (nee Allen) who was the daughter of a wealthy New Egypt farmer.

The new township of Brick, which included present-day Lakewood, Point Pleasant, Point Pleasant Beach, Bay Head and Mantoloking, was established in the same February 15, 1850 charter that created Ocean County, which was formed from the southern portion of Monmouth County.

In 1892 some of the residents of present-day Lakewood perceived that its best interests were not being represented on the Brick Township Committee.

Without informing Brick Township officials, on February 25, 1810, “Bricksburg” changed its name to “Lakewood” after a spokesman got the State Legislature to pass a bill that created the new municipality, splitting off from the eastern 24 square miles of Brick Township.

In addition to Joseph Brick, the founding families of the township include the Woolleys, Burrs, Allans, Cooks, Havens, Herberts, Wardells, Osborns, Tiltons, Johnsons, Grants and Hulses.

These families made up most of the population of 1,558 residents in 1850. The Lovelands settled at the head of the bay in 1832 and formed a small hamlet of baymen after Michael Ortley had purchased large tracts of beach and farm lands in 1816.

Small settlements were formed in various areas, often names for families associated with the region.

The Ocean County Historical Society, located on Hadley Ave. in Toms River, provided documents, historical letters and books for this story, including “Ocean County: Four Centuries in the Making” by Pauline S. Miller; “The History of Brick Township” by Eleanor Angott; and “The History of Lakewood” by Phoebe Theibault. 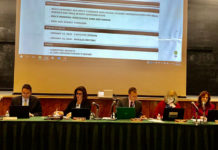