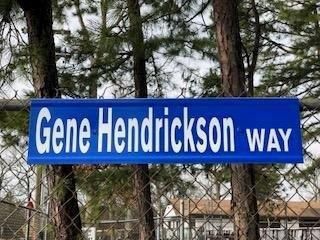 LAKEWOOD – For more than 35 years, his store on Clifton Avenue, Gene’s Photo Center and later Gene’s Photo and Sports Center, became the depository for photos and artifacts about Lakewood that people no longer wanted.

Gene Hendrickson preserved them. He loved Lakewood and became known as its “unofficial historian,” presenting slide shows and commentary on the town to more than 5,000 people throughout the years.

On Sunday, April 8, 2018, at 2:00 p.m. the road leading from the entrance of Pine Park to the Sheldon Wolpin Lakewood Historical Museum will officially become “Gene Hendrickson Way” in honor of Eugene L. Hendrickson, who was very active in gathering and preserving Lakewood’s rich history. It was Gene who served as the first chairman of the Lakewood Heritage Commission.

About Gene Hendrickson: Eugene L. Hendrickson went to Lakewood High School, but left early in the 1940s to join the Marine Corp, serving in the Pacific and China during WWII.  When he returned home, he went to the School of Modern Photography, NYC, to pursue his interest in photography and cameras. Upon graduation, he returned to Lakewood to start his business Gene’s Photo Center, which he operated for 37 years with his late wife Jane whom he had married in 1947.  Their children are Gene Hendrickson, Lakewood, and Patricia Hutton, Buckingham, Penn.

Areas May Open To Breweries, Wineries