BERKELEY – The Good Luck Point section of Berkeley Township was once a tiny community of two- and three-bedroom ranches, modest older homes built on slabs that some families had owned and loved for decades. Many of them had no insurance when Superstorm Sandy hit.

Those smaller homes didn’t stand a chance on that dark day six years ago, when Superstorm Sandy roared onto the Jersey Shore on October 29, 2012 and took most of this small community that juts out into Barnegat Bay with it. 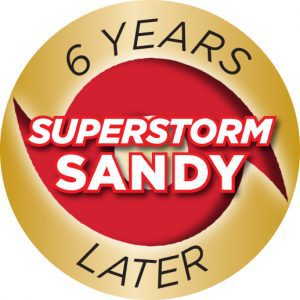 Good Luck Point looks a lot different today. The horizon is filled with much larger homes up on pilings, homes which probably cost way more than the $150,000 RREM (Reconstruction, Rehabilitation, Elevation, and Mitigation) grants eligible primary homeowners received to rebuild after the storm.

The new houses dwarf the few remaining older homes, most of which are mold bombs waiting to be torn down or sold just for the lots. The old Good Luck Point has almost disappeared. The gentrification of the one of the lowest-lying areas in the township is almost complete.

There’s still an original home at the end of Good Luck Drive that is elevated, but unfinished. It was owned by Linda and Howard Baigus at the time of the storm. They vowed to come back then. An almost cheery Linda Baigus greeted a reporter from The Berkeley Times a few weeks after the storm.

“Want to see my living room?” she asked.

There was no living room. The fireplace was all that was left. The vicious three-foot storm surge took the roof and the walls and their two-story garage.

It doesn’t look like anyone lives in their home now or whether the couple still owns the house. If they still do, hopefully they will eventually be able to come back.

Much of the nearby Glen Cove section looks the same, with homes already elevated or homes in the process of being lifted, sold or demolished.

Would Good Luck Point survive another Sandy? Let’s hope we never find out.