BERKELEY – A good time for a good cause was had at the Emiliana’s Hope 2nd Annual Mentor Day and Family FunFest, held at Veterans Park.

The event is used to educate people about – and raise funds to fight – childhood cancer. It is named after Emiliana O’Brien, who was 13 years old when she passed away from cancer.

The event raised $3,700, said Emiliana’s mother, Janet O’Brien. The money made after expenses will be used to financially assist the families battling pediatric cancer through helping them with household bills, putting food on the table, and providing gas cards for transportation to and from treatment.

The park had a rotating schedule of musical acts. There were also inflatables, a fun bus, and lawn games to be played. Some of the booths around the park were selling ice cream and other treats.

There were several arts and crafts booths, offering face painting, flower arranging, and other crafts.

Unfortunately, childhood cancer is more prevalent than anyone would like to think about. Approximately 10,270 new cases of cancer are expected to be diagnosed among children from birth to 14 years during 2017, and about 1,190 children are expected to die from the disease, according to the National Cancer Institute, the federal government’s education center on cancer.

O’Brien addressed the crowd and told her family’s story. After six months of misdiagnoses, Emliana was diagnosed with osteosarcoma, a bone cancer. Months of treatment followed before they were told that the chemotherapy wasn’t working. A week later, their son Connor was born. “We had seven weeks as a family of five,” she said. Emiliana passed away on Dec. 1, 2015.

“She had hope on that last day that she was coming home with us,” she said.

Emiliana was not able to join trials for experimental treatments due to lack of funding, she said. “They shouldn’t have to be told they’re not going to make it.”

The idea of hope was represented in the symbol of a dragonfly, she said. It means “I’m somewhere better.” Every key moment in the fundraising journey has featured an appearance by one. The first time they had a board meeting for the foundation, she came home and her entire front lawn had hundreds of dragonflies on it.

Sadly, Emiliana’s family was not the only one in Berkeley affected by this. Team Trevor was on hand collecting for their Christmas in July drive. Trevor Kwatkoski had also been diagnosed with osteosarcoma, also in 2015.

Last year, the family collected more than 1,500 toys for kids at the children’s hospital at Robert Wood Johnson, Tom Kwatkoski said. Even with all these toys in front of him, Trevor didn’t ask for anything, he said. They were looking for everything from coloring books to video games. The following sites are collecting toys:

Sign Up Signs (which donated signs for the fundraiser), 649 Atlantic City Blvd.

The next Emiliana’s Hope event is a golf outing on Sept. 14 at Cedar Creek Golf Course, with a luncheon at The Cove Waterfront Bar & Grill, both adjacent to Veterans Park. Sponsorship opportunities are available. For more information, go to EmilianasHope.com. 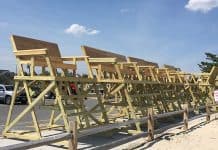