BERKELEY – Several groups had a shared vision – to help local residents – so they shared a day to collect donations, raise funds, and spread awareness.

In the parking lot of H&M Potter School, members from the Berkeley Shores Homeowners Association, the Police Benevolent Association, and the Bayville Fire Department set up tables. Locals busily stopped in to take part.

Berkeley Shores was collecting food that would then go to St. Barnabas in Bayville and to the mayor’s food drive at the recreation center. Cathy Mundry said that they were able to fill three SUVs with donations. At least 30 people came by to drop things off. A few even had their trunks filled with food. It helps that the school was close to the local grocery store.

Member Chuck Crunkleton said the Berkeley Shores Homeowners Association started in 1985 and the annual food drive started soon after that.

Chris Shick, delegate to PBA 237, said it was a strong way to kick off their toy drive. There is a drop-off in conjunction with the Veterans of Foreign Wars Post 9503, and there will be a pick-up before the holidays. There’s always a need to help people less fortunate, and over a year in a pandemic is making this more important than ever.

The Bayville Fire Company was doing their calendar raffle as well as selling shirts and challenge coins. Several of the junior members (kids of the firefighters) were very good salespeople. These items are also available at the fire house on any Tuesday after 7:30 p.m.

Chief John Anderson said it was a good day for reaching out to the public, since there were a lot of people coming out to give.

Their recent open house celebrating their 75th anniversary was cancelled due to weather but they are working on rescheduling it, he said. Their next big event is escorting Santa Claus through town just before Christmas. There is an app called Glimpse that the fire department is inviting people to download so that they can find out where and when the Santa tour will come through. 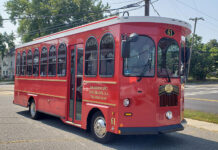 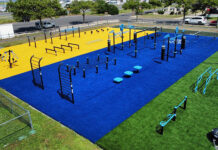 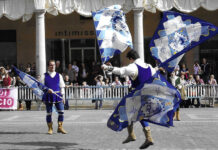 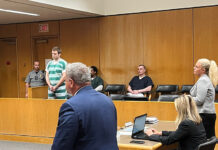