BERKELEY – The governing body passed some measures to support businesses that are reopening and provided an outdoor space for religious, school and fitness organizations to gather.

Gov. Phil Murphy has slowly moved forward with the reopening of businesses, such as allowing outside dining.

“Business has been down substantially,” Mayor Carmen Amato said. “Some have had to lay off employees.”

Normally, a restaurant would have to pay a fee to the township to have outdoor dining. The Township Council has waived any municipal fee. However, there might still be a fee to the New Jersey Division of Alcoholic Beverage Control.

The Township Council would also have to meet and approve it under normal conditions. The council usually meets once a month. The governing body didn’t think it was fair to make businesses wait for this so they created a subcommittee of the council – three members who would be able to meet more quickly and review a restaurant’s request and approve it more quickly.

Furthermore, the township would refund any outside dining fees already paid since March.

School clubs and sports teams have been wanting to have end of year celebrations. Large gatherings are still not allowed indoors. The stage area at Veterans Park would be a good alternative, township officials decided.

Councilman Angelo Guadagno, who is the council’s liaison with the Recreation Department, said that these teams and clubs haven’t been able to say goodbye at the end of the year because of the restrictions. They can now give kids the proper send-off.

The Berkeley and Central Regional school districts and their groups will be able to use the property free of charge on a first come, first served basis until Labor Day, which is Sept. 7.

For the same reason – the lack of indoor gatherings – the township is also allowing the stage area to be used by religious organizations, gyms and fitness centers.

Permits will be issued on a first come, first served basis through the Recreation Department. These will also be free of charge through Labor Day.

These decisions were made at a special Township Council meeting held on Friday, June 12 so that the restaurants could be ready to go when the governor allowed outdoor dining on June 15.

Officials also discussed how to approve the permits in such a way that one group doesn’t dominate it. For example, they didn’t want one gym to block out an entire day of programs so that no one else could use it.

The rules are also only for organizations based in Berkeley. 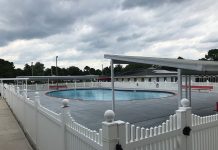