TOMS RIVER – In September, Toms River schools will have a virtual option for children, but there is also currently an option for a blended program – a mix of virtual and in-person education.

Planning for re-opening in the midst of a pandemic has a lot of moving parts, and things change every day. It’s for this reason that Superintendent David Healy predicted that schools will be totally virtual in September.

APP.com ran an interview with Healy where he expressed his concerns. The article explained that the district will have both options: entirely virtual or a mix of virtual and in-person. However, the website hid the story behind a paywall, so unless you were a subscriber, you couldn’t read the real story. Instead, you just got the headline which just said “We are not opening in September.”

Other publications took off on this, in order to generate clickbait and get ad revenue. This made the false information spread. Parents had trouble trying to confirm the information because the district’s website and phones were down due to Tropical Storm Isaias knocking out power at the administration building.

“Most people just read the headline,” Healy said in an interview with JerseyShoreOnline.com. “They’re assuming Toms River is not opening and that’s not what the article said.”

He doesn’t fault the reporter. There was nothing wrong with the article, just the headline, he said. His quote was a prediction based on what he’s been seeing in the world of education. There’s a growing movement to go entirely virtual.

Christine Miles, Associate Director of Professional Development and Instructional Issues with the New Jersey Education Association, gave testimony to the Assembly Education Committee on July 22: “As a former school administrator, I was trained to put a school on complete lockdown if a weapon was brought into the building because it could cause significant harm or death. In the event that a weapon was in the building, you do everything in your capability to isolate and contain the threat in order to protect the lives of students, staff, and the entire community.” Therefore, why wouldn’t you do the same thing with a potentially deadly virus?

New Jersey legislators have introduced a bill to make all state schools virtual until Nov. 1, at which time it would be looked at on a month-to-month basis.

Looking at trends like this, Healy said he wouldn’t be surprised if districts across the state are 100 percent virtual in September.

Regardless, no matter what the state decides, districts need to be told as soon as possible. Schools impact everything, Healy said. Businesses need to know if their workforce will need to be home with their kids. Parents need to find childcare.

Gov. Phil Murphy has been criticized for changing regulations without warning, leaving people scrambling to comply.

At a recent Board of Education meeting, Toms River school officials revealed their plan for reopening in September, offering parents the choice of either 100 percent virtual instruction or a mix of virtual and in-person education. The plan has not changed since the meeting.

Since the guidelines and the pandemic keep changing, school officials said they are prepared to do all virtual, all in-person, or blended depending on what is needed. They are prepared to offer any of those in September, but it is looking like parents will choose either virtual or blended. There are also plans to change this mid-year. If the virus gets worse, then the district is prepared to go 100 percent virtual. If it is deemed safe, the district is prepared to go 100 percent in-person.

Blended learning means that half the students will be in the buildings on Monday and Wednesday and then be virtual the other three days. The other half would be in the buildings Tuesday and Thursday and virtual the other days. There would be four hours in school supplemented by virtual learning. As of right now, students with last names beginning with A-K will be Monday/Wednesday and L-Z will be Tuesday/Thursday. Children in the same household with different last names will be placed together.

The virtual learning, whether it is 100 percent of a child’s week or as part of the whole, will include a mix of self-guided lessons, interactive activities, and more.

Self contained special needs students will have four, four-hour days of in-person education and a virtual Friday.

Between the students taking shifts in the building, and the portion of students staying home entirely, there are expected to be fewer people in the buildings and busses so that social distancing is possible.

Some safety details include:

As the pandemic changes, information will be updated on TRSchools.com/community/tr-safe-return. Questions can be emailed to TRSafeReturn@TRSchools.com. 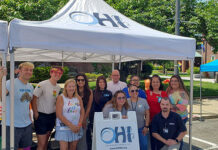 COVID Vaccinations Given During Pride Event