TOMS RIVER – The governing body moved to acquire the Red Carpet Inn, because they don’t want drug dealers or prostitutes staying there. But residents spoke out against this because of another group that stays there: the homeless.

For years, that hotel, no matter what name it had, has been a thorn in the side of officials. They publicized that it had been visited 750 times by police in two years.

The Red Carpet Inn and its property on West Water Street will be acquired by the town either through negotiation or by eminent domain, and $4.8 million was set aside for the purchase and rehabilitation of that property. It will serve as a symbolic portion of the town’s redevelopment plan to turn the downtown area into a thriving shopping village with apartments above small businesses. Part of the $4.8 million would go toward flood control measures to protect properties downtown.

However, there were some who questioned the money that was going to be spent on this project, stating that $4.8 million could set up a homeless shelter. Hotels like this one are sometimes used to house homeless.

During Code Blue nights, when it’s really cold, homeless people are in more need of shelter than ever before, said Martha Barnhill, a member of Haven Beat the Streets, which serves the homeless community.

The township shouldn’t shut down this hotel without a shelter in place, she said. Lately, organizations have had to turn people away due to lack of rooms. This would take even more rooms off the market.

“If you can find ($4.8 million) for that building, you can find a grant for us to get a building,” said Patty Oyola, another Haven representative.

Bertram Hout is a homeless man who addressed the governing body during the public comments portion of the meeting. He urged them to keep it open.

“What they offer for resources for homeless is really nil,” he said. “When you start putting money above human value, forget it.”

Residents challenged the people’s Not In My Back Yard mentality.

“You can redevelop the town, but there’s still going to be homeless,” said Connie Pascale, a long-term advocate for homeless in Ocean County.

“It’s not just a Toms River problem,” Council President Brian Kubiel said. Toms River, neighboring towns, the county, and the state, should all work toward solving the homelessness issue.

“I don’t share my story for a number of reasons but I feel your pain,” he said. “A solution is needed, but this is not the solution.”

At the close of public comment, Kubiel asked for a council member to make a recommendation to either pass it or not. There was awkward silence before Councilwoman Laurie Huryk made the motion to buy the property, and Councilman Maurice Hill seconded the motion.

Each council member echoed Kubiel’s words that something needed to be done to help the homeless, but downtown is not the right spot.

“It’s a place people know they can get drugs,” Councilman Terrance Turnbach said. He noted that High School South kids are across the street at 7-11 all the time.

People have wanted the downtown area to be renovated. Recently, a large amount of the land there – including the hotel property – was rezoned to allow denser development, hoping to create a walkable shopping area with apartments over the stores.

Local attorney Robert Shea said he owns a lot of property downtown, and he fully endorsed what the town was doing. The new businesses that would come with the redevelopment would offset any cost the township is incurring for this project.

Children who grow up in Toms River often move out, he said. Maybe they will stay if there’s a good place to live and raise families.

Alizar Zorojew, the executive director of Downtown Toms River, said that he agreed with many of the speakers who said that there needed to be a place to house the homeless, but that this is not the right place for it.

Chris Doyle, who helps run Apex United in the downtown area, said it is hard to bring people in when the hotel is operating the way it is.

“Let’s do the right thing not just for today but for the future,” he said.

Some residents challenged the cost of the project, and the loss of a tax ratable.

Resident Martha Bowden suggested that another developer should take the property and redevelop it. She didn’t want the township to spend the money on this project.

Another resident, Dennis Galante, suggested that if the town goes after the hotel owner, charging him for the crimes of his tenants, then the town can get a much better deal. 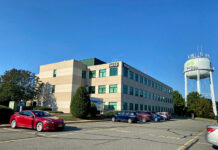