Rock & Roll Hall of Fame Inductees, Grammy Hall of Fame, Vocal Group Hall of Fame members and Songwriter Hall of Fame, The Rascals are coming together to perform for the first time in five years, stopping in Toms River on their tour.

“I had an epiphany while performing in Hawaii last year,” Cavaliere said. “It’s not about me – it’s about the fans. It’s about the music. I spoke with Gene and he agreed that we can’t take any of this for granted anymore.” 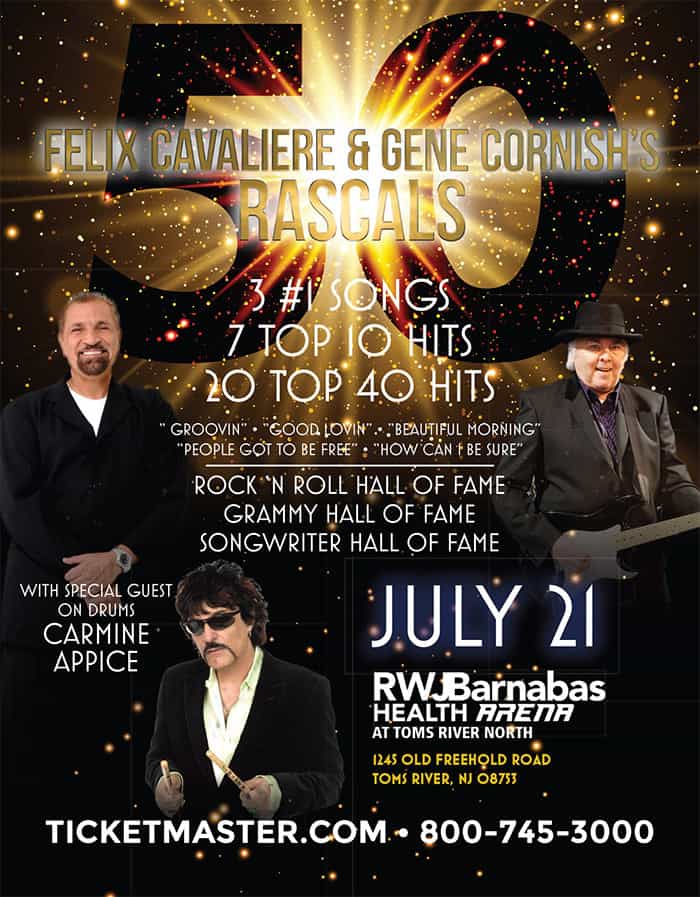 “There’s something magical that happens when we’re on stage together,” Cornish said. “We’re going to celebrate these songs for as long as the fans allow us to and give the fans a chance to see us perform live.”

Also joining Cavaliere and Cornish on the tour will be Carmine Appice, hall of fame drummer who has worked with Vanilla Fudge, Cactus, Rod Stewart, Beck Bogert & Appice, Ozzy Osbourne and Pink Floyd, to name a few.

“I grew up watching The Rascals on Ed Sullivan, I’m a huge fan,” Appice said. “These songs are the soundtrack to so many peoples’ lives. I’m looking forward to sharing the music with life-long Rascals fans, and to new generations of fans.”

Come out to the RWJBarnabas Health Arena on July 21 for this legendary reunion! You can buy tickets beginning April 27 at 12 p.m. on Ticketmaster.com or by calling 800-745-3000.