TOMS RIVER – Township police charged three adults and one juvenile in the theft of merchandise valued at more than $9,000.

Police had to chase down the foursome on May 4, when they responded to a call of a theft in progress around 1:20 p.m. Multiple police units were dispatched to ULTA, at 1203 Hooper Avenue.

The thieves fled from police and entered a grey Mitsubishi with out of state license plates. Officers scanned the area and spotted the vehicle in a parking lot a short distance away.

Four people matching the description of the thieves were standing outside of the vehicle. A township officer approached the group and they once again dashed from the scene disobeying his commands to stop. Additional units responded to the scene.

Bronx resident Frank Greene, 22, was quickly apprehended. Officers observed a male suspect enter a nearby home on Bay Avenue and located him in the house’s basement. He refused to surrender and ran out through a rear door but officers were waiting outside for him.

The 17-year-old boy was also from the Bronx NY and was taken into custody. Two women, identified as Shaquana John, 24, of Brooklyn, and Sereniti Butler, 20, of the Bronx, were found in a wooded area near the scene. Each were taken into custody within 24 minutes of the initial call, police said.

Approximately $9,221 worth of items were confiscated.

Police suspect that this group may be involved in similar robberies within the tri-state area. They are being investigated by multiple agencies.

Chief Mitch Little said he wished “to commend our officers for their quick response and apprehensions, as well as their dedication and professionalism during this incident.” 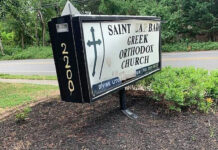