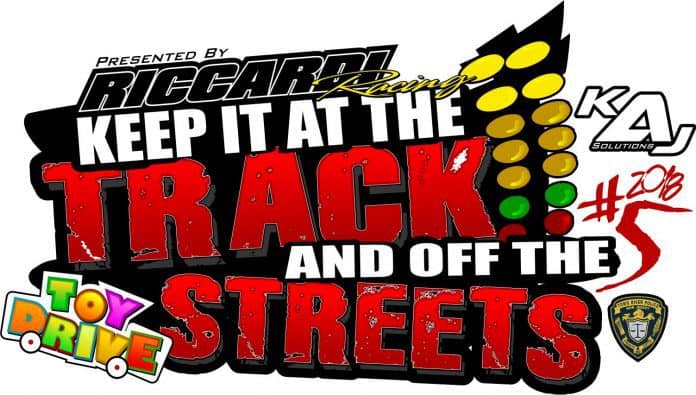 TOMS RIVER – Toms River Police will be providing an escort for street racers to the 5th annual “Keep it on the Track and Off the Street” event on Sunday, Nov. 18. Police will escort racers 45 miles from the Walmart on Route 37 to Atco Dragway.

“Keep it on the Track and Off the Street” is intended to encourage drivers to race their cars at the track and not on township roads.

The event will also feature a toy drive hosted by the Toms River Police. Each driver should bring one unwrapped toy.

The event was thought up five years ago by profession drag racer and Toms River native Rick Riccardi, who brought it to Chief Mitch Little in the hopes of keeping racers off the streets.

While Riccardi has admitted to racing on township streets himself in younger days, he also understands the danger associated it.

“We want to encourage them to ‘Take it to the Track and Keep it Off the Streets,’ where it is a safe and controlled environment,” stated Chief Little.

Riccardi and Little expect this year’s event to be the biggest yet, with an anticipated 100 drivers and a hopeful goal of over 1,000 donated toys.

If you wish to join in the race, it is free. If you wish to get your vehicle safety checked, it is $40. The cost to come and watch is $15. Racers who have highly modified vehicles will be charged $105 and one unwrapped toy.

Cars must meet Department of Transportation specifications for legal tires.

Drivers: meet at the Walmart parking lot on between 6 and 6:30 a.m. The escort to Atco will begin at 7 a.m.