TOMS RIVER – The township’s paving project on the barrier island was a subject of discussion at a recent Township Council meeting.

The roads will be resurfaced as part of an effort to recover from Superstorm Sandy.

Bill Kuzbyt, of Ortley Beach, said he was concerned that a lot of utility work done after the repaving would make it a waste of time and effort. The road would be bumpy or uneven from the patch jobs.

“I’m by the ocean. I want to hear the ocean, not trucks bouncing down the road,” he said.

Township engineer Robert Chankalian said the township has been working with the utilities to coordinate the paving with the end of their projects. There will be a moratorium on road work for the utilities. If a private owner has to have work done, and the street has to be opened, the township can’t stop that.

“We can’t wait for everybody because the roads are going to get worse,” he said.

However, the job to patch it will be held up to a high standard to prevent the uneven nature of pavement after there’s been work done, officials said.

The resolution that allowed the township to go out for bid on the project noted that it would be eligible for a partial reimbursement by the Federal Emergency Management Agency since it is part of the recovery from a natural disaster.

Kuzbyt also thanked the Town Council for following his advice about leaving the restrooms open longer for people coming off the beach. 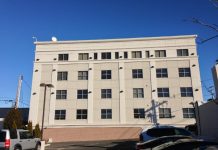