TOMS RIVER – Only one incumbent will retain their seat after the Nov. 7 election. All of the incumbents were Republicans, being challenged by Democrats.

However, the other three wards fell to Democrats.

Election figures were reported by the Ocean County Clerk. All districts were counted, but vote counts have not been finalized. 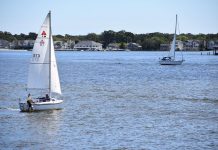 Sailfest To Set Sail On Virtual Waves This Year