TOMS RIVER – Whenever there’s a big problem, everyday people often step up to the challenge.

Wherever COVID-19 has struck, there has been a shortage of personal protective equipment for first responders. Globally, the story is the same: as the numbers of infected rise, so does the demand for masks, gowns, and other necessities among the medical community.

Township resident Eric Mewengkang is part of a group of people who have been using their 3-D printers to make masks for medical professionals.

These masks are a plastic shield that drops down from the forehead and creates a kind of splash guard for the wearer. They are not to be confused with the N95 respirator masks that look like surgical masks and filter out particles from the air.

His group is made up of people from all over the world. There are about 8-10 people who collectively print about 200 masks a day.

They might get feedback like “it’s too tight on the straps,” and then they make the necessary adjustments. He estimated that this group has spent hundreds of thousands of hours fine-tuning the process.

The first ones took four hours to print. Now, they can be done in 30 minutes, he said.

He dropped them off to some doctors at Community Medical Center in Toms River and they loved them. It snowballed from there. Now, he’s getting requests from doctors and nurses all over the state and even from Rhode Island and North Carolina.

Officially, hospitals can’t approve these masks since they are being made in someone’s home, rather than a quality-controlled factory where they would be tested. However, doctors and nurses from these hospitals have reached out to him directly for masks, and he drops them off outside the hospitals and medical offices.

“Doctors are saying ‘We’re at home making masks out of shower curtains and clothes,’” he said. Others have told him that they share a mask, washing it in between uses.

“They’re better than nothing,” he said.

Hobbytown in Toms River donated some of the raw material. Others are donating cash to help him make more. If you are interested in donating, visit gofundme.com/f/funds-to-make-ampdonate-3d-printed-face-shields 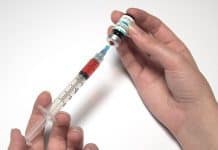