LAVALLETTE – Due to state legislation requiring body cameras on all New Jersey police officers, the borough’s men and women in blue will soon be outfitted with visual recorders.

During a recent borough council meeting, officials approved the purchase for the cameras which Borough Administrator Robert Brice said were required to be operational by June 1.

Brice is a former Wall Township police chief. Twenty Axon Enterprise, Inc. cameras, along with associated equipment and services, will cost the community approximately $126,000 for the purchase.

“The cost will be spread out over five years. We were notified about it at the end of last year. The police department has 11 full time officers and special officers,” Brice added.

The attorney general lists a specific criterion concerning the use of body cameras and when they would be activated. Among the areas to that list according to Brice were instances where police are involved with a use of force and addressing underage drinking and marijuana possession, in addition to other scenarios.

Like many communities, Lavallette is seeking a grant that would defray or cover some cost of the purchase.

The communities who have applied have not yet been notified as to how much they will receive. Councilwoman and Public Safety Chair Joanne Filippone is hoping that the borough’s grant could cover the full $126,000 cost.

Brice said that the borough wasn’t sure when he’d hear back from the state concerning the status of the grant application that will be applied for. “Everyone is taking the first step. Right now, all municipalities are in the process of developing their budgets. Some towns won’t need to do this as they have the body cams already.”

“We are spreading it out over five years. The first payment is $245,000.” Brice said. He was hopeful that the borough would get the complete amount for the purchase from the state but anything that is not covered would come out of the borough’s regular police budget allotment which would mean other items that would have been earmarked for the department would not be expended for. 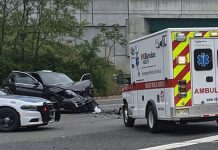