The ship is deployed to Rota, Spain, and is on patrol in the U.S. Sixth Fleet area of operations in support of regional allies and partners and U.S. national security interests in Europe and Africa. 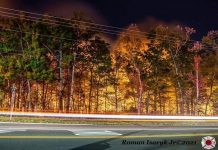