Perabo graduated from North in 1994 and has gone on to appear in television and Hollywood films such as “Coyote Ugly” and “Looper.”

According to a statement from Principal Ed Keller, she was scheduled to address the senior class at an assembly on Oct. 15.

“The focus of her discussion was to share her experiences while a student at HSN and how they have influenced her life and career success,” he said. “However, the assembly ultimately presented a scheduling conflict with everything happening in the district this particular week, including a highly anticipated school board meeting also taking place at HSN. The assembly has been postponed to a later date that we’re currently working to establish.” 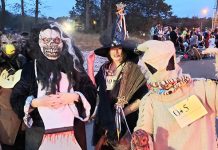