TOMS RIVER – It’s hard to sum up 18 years. Yet that’s what Councilwoman Maria Maruca has been doing as she looks back at her tenure of public service.

Maruca lost her re-election bid in a primary battle with Justin Lamb, a rival Republican who ultimately won the race in November.

She had been on the council since the change of government in 2003, when the voters decided they wanted a directly-elected mayor rather than one chosen from among the members of the committee.

Maruca prided herself on working bipartisanly, from Democrat Mayor Paul Brush back then to current Democrat Council members Terrance Turnbach and Laurie Huryk.

During her tenure, the township has saved about 500 acres from development, she said when asked about some of the accomplishments she is proud of. Some of this was through purchases with the town’s Open Space Tax fund. But for larger buying power, the town partnered with groups with deeper pockets, such as the Ocean County Natural Lands Trust Fund, the Trust For Public Land, and state Blue Acres and Green Acres.

For example, there is what became known as the Jamm Realty/Home Depot land. This is on the corner of Fischer Boulevard and Hooper Avenue. At one point, 350 homes and a Home Depot was proposed for that already busy intersection.

Another was the Camp Albocondo and Boy Scout property. Yet another is the Girl Scout complex on North Bay which will have a softball complex. Getting as recent as the last few months, there was the Surf Club property, which was one of the few oceanfront locations available for sale that will now be open to the public.

Toms River never had a township boat ramp until now, she said, which is downtown on Riverside Drive.

Some projects are ones that will have to continue long after her term, such as beach replenishment. This is an ongoing challenge, where it will have to be maintained every few years. This will require working with the state and other entities because the township doesn’t have the resources to do it alone.

Still, even after racking up a lot in the “wins” column, there are still things she wished she had the chance to do.

One of them is installing lines to get some neighborhoods on township water. “It’s been done twice, usually with the DEP,” she said. “We tried to do it post-Sandy, to extend it further, but it didn’t happen.”

These 18 years weren’t all good. Superstorm Sandy devastated many lives, and the town is still recuperating. The pandemic hit everyone hard and is still touching a lot of families. The amount of people who need food and basic necessities has increased.

Yet it was at these low moments that people lifted each other up. She said she felt reassured “To see our residents come together in a time of need, neighbor helping neighbor.”

Her term ends at the end of December. One loss doesn’t mean that she’s retiring from politics. “I’m going to keep my options open. If the opportunity arises, I would evaluate it with my family and make a decision.”

There are other ways to help residents outside of politics. She has been the Executive Director of the Seaside Heights Business Improvement District, and had been either a volunteer or a board member of a number of worthy organizations, such as the American Cancer Society, the Toms River Chamber of Commerce, Ocean of Love, scouts, and the Toms River East Little League.

Even if she’s not on the Township Council, she doesn’t expect her public service to end. “I will continue to work to make Toms River a place where everyone is welcome and a great place to live.” 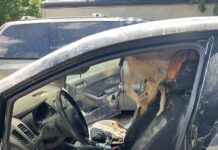