TOMS RIVER – What was the substance that washed up on beaches in Ortley? It alarmed some beach goers and kept them out of the water.

The Army Corps of Engineers was performing a 14-mile beach replenishment project throughout the shoreline. A statement from the Corps said that the dredges struck a deposit of peat, which is harmless.

“It appears the dredge hit a peat layer in the offshore borrow area. Peat is a naturally occurring material and is typically a combination of ancient soil and vegetative materials,” the statement read. “While the borrow areas (where the dredge is taking sand) are rigorously sampled during the planning of the project, it is possible that a dredge can encounter a layer of peat. These peat layers are common along the coast of New Jersey.”

The Army Corps went on to state that the Corps, and the State Department of Environmental Protection, will work with the dredging contractor, Weeks Marine, to limit the amount of peat being dredged.

“The dredge EW Ellefson resumed dredging operations on July 13 and the team observed typical sand being discharged from the pipe,” the statement continued. “Toms River Township raked the beach and was able to remove the vast majority of the peat material from the beach.”

The original thought was that the dark material was burned boardwalk wood. The Seaside Heights boardwalk caught fire in 2013, but this residue might be from the fire in 1965.

(Editor’s Note: the original headline for this article was changed once we received confirmation from the Army Corps of Engineers. On social media, once the stories are posted, it is NOT possible to change the headline in the embedded post.) 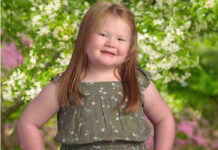